Let's Take Out That Bit About Mother-Altering an Image

Let's Take Out That Bit About Mother-Altering an Image

Sometimes it is better if we can clean up records before we publish them. It's very easy to alter an image--either to remove something we don't like or make it say something that it does not. 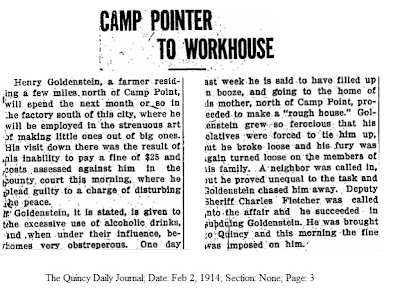 The above image has been slightly altered from the original.

Would you go back and look at the original? Or would you just take the image as you found it on someone's blog, believing it to be a true representation of the original, and using it yourself? After all, no one would ever manipulate an image to alter its content or to change its meaning. That sort of thing just never happens.

I decided that I really didn't want the world to know that Henry Goldenstein got into it with his mother, so I decided to take that part of the headline out of the article. It was easy to do and unless a person viewed the original, they'd never know. And I've at least kept great-great-grandma out of this reference.

The original is below (which was used as an illustration in an earlier blog post on Henry). 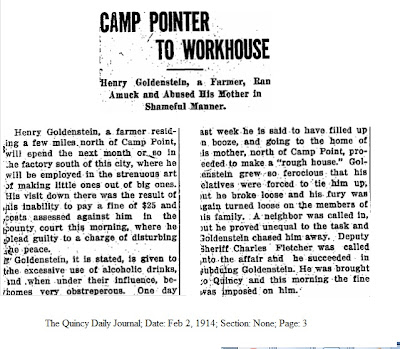 Fact is, even the image above has been manipulated to make for a nicer sized image. 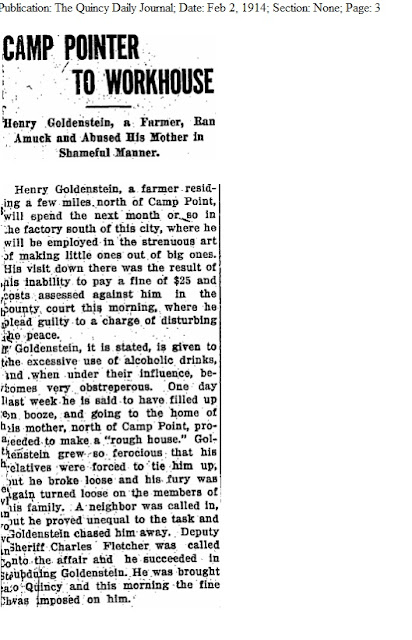 And even that image has some issues on the left hand side--as if something's not quite been copied and pasted correctly from that image.

Which possibly makes it necessary to obtain the original on microfilm.

We're still working on how to cite these images. But frankly, I'll site the image as it is on the Quincy, Illinois Public Library website. The only reason I would cite these images is if I was using them as illustrations or I could not locate the original image on the library's site.

But isn't it easy to make a few changes?

And in this case the changes really weren't material now were they?

[reminder--Our citations are not in the spirit of Evidence Explained on our blog. That's saved for the newsletter-Casefile Clues. There is always enough information though that the discerning researcher can find what we've used if they need to see it themselves.]