Provenance of City Directories on Ancestry.com

Providers of digital images try and make it easy for researchers to just "click their way" to their ancestors or to information that may help them in their search.

But research is not just about that information or that digital image. It is about how that image or information came into our possession and how it arrived to our computer screen. We're not talking about the details of an internet connection here. It is more than that.

A recent blog post contained an image from the 1894-1895 Davenport [Iowa] City directory: 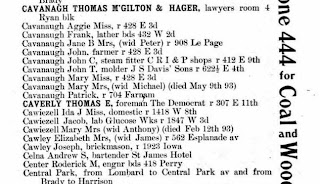 A little maneuvering on the page told me that I was on page 105. That was fairly easy. But exactly what book was on my screen? I knew I was looking at a city directory, but which one and when was it published?

The header of the image browser indicated that I was looking at the "Davenport, Iowa, City Directory, 1894." That really did not quite sound like the title of the publication to me. It sounded a little too generic.

What Does Ancestry.com Say It Is?

One needs to view the "earlier" images in order to determine as best one can exactly what is being viewed. In all the screen shots that comprise the remainder of this blog post, the image number from Ancestry.com s viewer can be seen. Fortunately Ancestry.com did not strip those microfilm images before posting their digital version of the microfilm.


The title for the Davenport directory I was using is not quite correct on Ancestry.com--it's actually Stone's Davenport City Directory 1894-1895 as shown below: 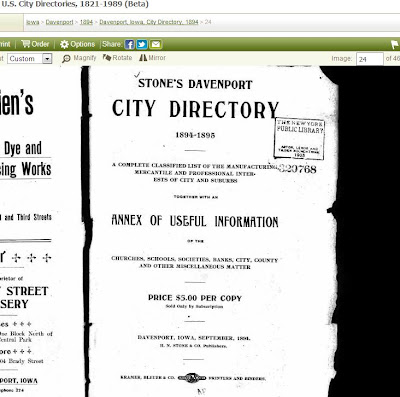 Does Anyone Really Care?

Does it matter that the title wasn't entirely precise in Ancestry.com s listing? Yes it does. It lets the searcher know what has been searched without having to refer to the actual title page of the publication. Some cities had directories published by more than one publisher and it is also possible that a city might have had specialized directories published in addition to ones that attempted to list every resident (or at least male resident). Titles matter.

Where Was the Original? 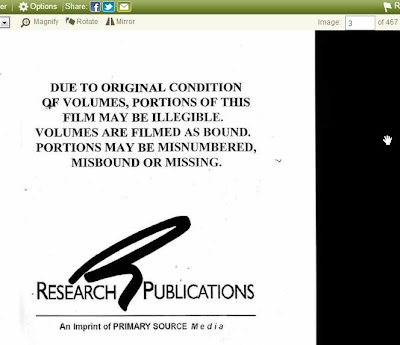 The Davenport directory was apparently one held by the New York Public Library which apparently gave permission for it's materials to be microfilmed as indicated in the image shown below. 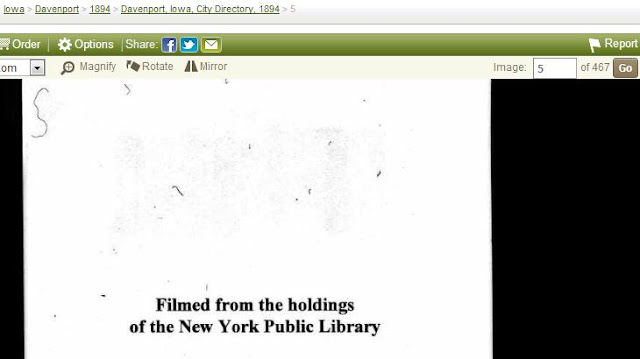 When was the original microfilming done?

One cannot be certain, but was apparently in 1993 or after. This test image was also included in the microfilmed copy and included in the digital images. It was done to confirm image quality at the start of the photography. The image sheet has as copyright date of 1993. 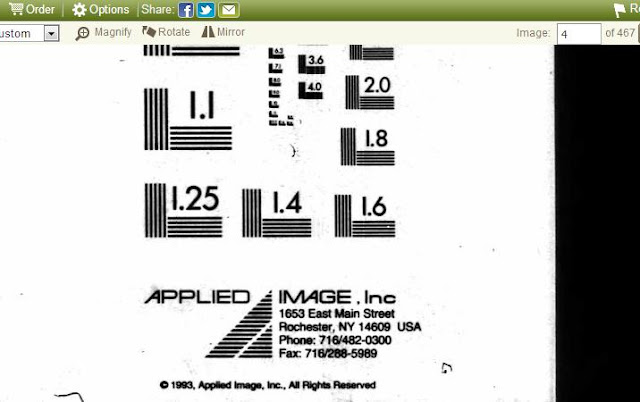 A little looking at the images before your "desired" image may tell you something about the actual material you are using.

In this case, we learned the actual title of the publication and that the digital image we are using was created from microfilmed copy (made in 1993 or after) of a copy of the directory in the collection of the New York Public Library.

In this case, there do not appear to be missing pages, images that are not clear, etc. If there had been, knowing how this image was obtained and what it originally came from would have helped us in locating alternate sources of the same material.
Posted by Bubba at 11:15 AM