I occasionally hear people say that "I have Google alerts set up to catch use of my content. I don't need to do anything else. That's gonna catch everything." Wrong.

This was my "Genealogy Tip of the Day" for 9 December 2012 (originally posted at http://genealogytipoftheday.blogspot.com/2012/12/take-number-and-use-it.html) :

Now if I have appropriate Google Alerts set up for tip, Google will tell me if someone posts this precise text on their blog as actual text (or pieces of it--depending upon how specific I have the alert). The trick content copiers use to get around a Google search is to post the stolen content as an image--either as graphics in online slide presentations or simply as an imags posted to their blog or Facebook wall.

Here is the same tip as an image:

Searches for the text of this tip won't pull up this blog post--because what may appear to be the "tip" in black text on a white background was posted in this blog post as an image as well. It was pretty simple to type the text in this blog post, do a print screen, and then paste that into a graphics program, crop the image, save just the tip text as an image, and insert that image into the post or website.

Google alerts won't catch these attempts to re-post your material.

Let's say as a conversation starter, I post an image of this tombstone: 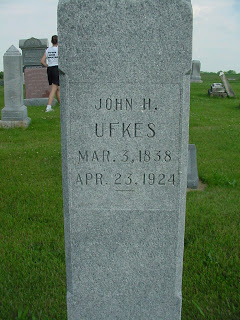 Here's an image that I could post that includes the tombstonen picture and the prompt that would get around Google searches and alerts set up for the phrase "Do you think the inscribed dates were done at the same time as the inscription on this stone." 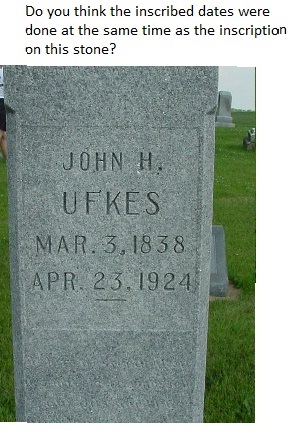 Of course, Google searches for that phrase will bring up this blog post because I posted the actual text here in two places.

But if you think Google searches and Google alerts will catch these attempts to abscond with your material--think again.

And for those who think I'm giving content stealers ideas, think again one more time.