They were all living on what used to be called the "Habben Corner" west of Carthage, in Prairie Township. This   image shows the families of Lewis, Mimka and George Habben. Mimka and Tjode are my great-grandparents and the youngest daughter, Dorothy is my grandmother. Mimka and Tjode both went to the 8th grade--which I kind of expected. Grandma was in her 3rd year of high school and Aunt Margaret (absent) was listed as a school teacher for her occupation. The men were listed as farmers and Philip (son of Lewis and Helen) was listed as a radio announcer.

My initial guess is that Margaret Habben is listed as "C-3" for her education. I know it looks like an "A" but that's not on the list of abbreviations for that column and she did attend Western Illinois University in Macomb.

The entire page can be viewed by clicking on the image below to enlarge. 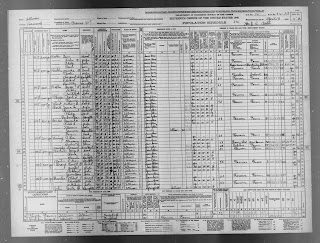 My webinar on searching the unindexed 1940 census can be ordered here.