Of all the pictures I scanned of various members of the Hancock County, Illinois, Neill and Rampley families over the past few days, this one is my favorite: 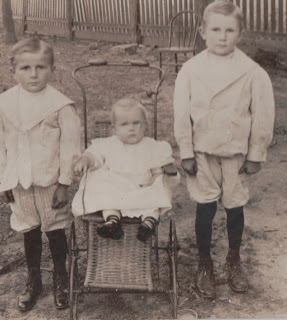 The picture shows the three oldest children of Charlie and Fannie (Rampley) Neill--Ralph, Nellie, and Cecil (my grandfather). Aunt Nellie was born in April of 1910, so I'm guessing that this picture was taken in 1911. My aunt Nellie in later years apparently chided her mother for how she and her older brothers were dressed in this picture. The picture likely was taken by a travelling photographer who simply showed up at the farm. Obviously this is not a studio portrait and I seriously doubt the Neills had their own camera back in 1911.


Where was it taken?

The 1910 census indicated the family was living in Walker Township, due west of St. Albans and where Fannie Rampley's parents had owned a farm until 1907. The farm the Neills were living on was rented and other than Walker Township, no more precise location is known.

I'm probably safe in saying that the picture was taken in St. Albans or Walker Township.

Note that Nellie is "unnamed" in 1910. The census was taken on 11 May 1910 with questions to be answered as of 15 April. Charlie's brother Edward is living with the family listed as "Brother and partner."

There is always a little bit of story in every picture.
Posted by Bubba at 8:56 AM