A Hat in the Tree

Sometimes we get so focused on one or two things in a document or piece of ephemera that we fail to notice additional details. Those unnoticed details may be significant clues or they may not be. The problem is that if we never notice them, we never know if they were significant or not.

Sometimes it takes someone else looking at an item and calling our attention to those details before we even notice them. And sometimes when those details are later pointed out to us we can't help noticing first every time we look at the item or wonder how we ever missed them.

The first image in this blog post is one of my grandfather John H. Ufkes (on the right) and two of his younger brothers (LeRoy and Alvin) taken at their parents' home near Basco, Hancock County, Illinois, in the early 1930s. I knew who identity of the people in the picture and had initially (for some strange reason) focused on learning the name of the dog (it's Scamper). Based upon the house, I would guess that this photograph was taken on the west side of the home (which is no longer standing).

But there was more to the picture. 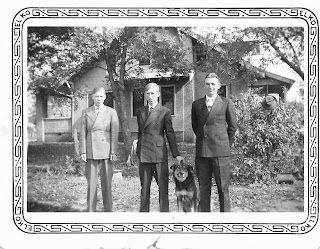 A friend on Facebook noticed that there was a hat and some sort of case in the photo as well.  For some reason those two items had not caught my attention. 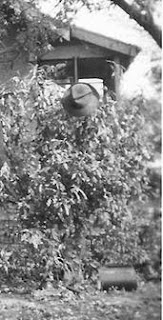 And sure enough, there they were.

Are they significant clues? I'm not really certain. But I do know one thing--I'll be keeping my eyes peeled for items in the trees and bushes from now on. One has to take information where one can get it.
Posted by Bubba at 9:14 AM