Despite years of looking, I was never able to find an even close match for on a passenger list for my German-born ancestor Heipke Miller.

Born in Etzel, Ostfriesland in 1832, Heipke's first known existence in the United States is her 27 December 1856 marriage in Quincy, Illinois, to Bernard Dirks. Her 1900, 1910, and 1920 census enumerations in Honey Creek Township, Adams County, Illinois all indicate an immigration year of 1854.

Experimenting with wildcards on Ancestry.com resulted in a probable match for Heipke. This result was obtained by searching for:


The screen shot shown below was the only name match that appeared to be even a reasonable match. Other matches for the first name were individuals whose first name was Hopkins. 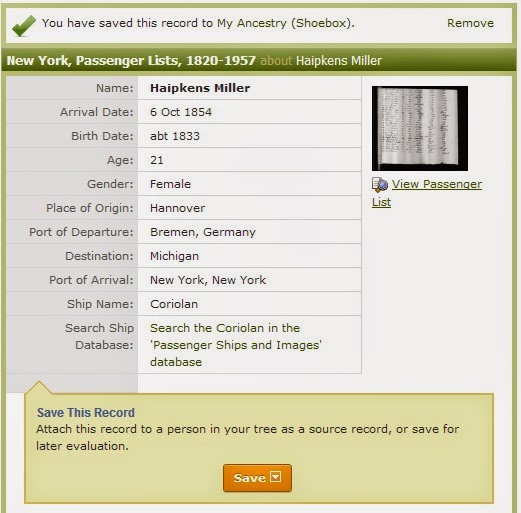 The year is consistent with Heipke's state year of immigration in the 1900-1920 census.  The destination of Michigan was a concern as no information on Heipke indicated she was ever in Michigan. Of course, Michigan could have been a short-term initial destination for Heipke or details on her Michigan settlement could simply have never been passed down.

It turns out that the Haipkens Miller on the 1854 manifest was not even going to Michigan. The lines on the manifest are somewhat slanted and a careful pairing of the entries indicated that Haipkens' destination was Illinois. That was consistent with family tradition on Heipke which indicated she came directly to Illinois--or at least that is were she was by her December of 1856 marriage.

The actual image shows the entry for Haipkens with a green line.

Given how Heipke is pronounced, spelling her name as Haipkens on the manifest would not be unreasonable.

I'm not 100% certain this is my Heipke. However, the information on Haipkens is consistent with what is known about about my Heipke:

And if I had never performed a wildcard search, I might never have found her.
Posted by Bubba at 12:32 AM