Millers can be difficult to find. My Henry Miller is no exception to that rule. Trying to find Henry in the 1860 through 1880 federal census schedules lead to an interesting discovery in the 1880 enumeration.

In 1860, Henry and his wife, Geske Catherine Miller, are enumerated in Brown County, Illinois, with their daughter Anke and her husband Henrich Adams. The adults in the enumeration are all indicated as having been born in Hanover. The women, at least on this census page, are enumerated as "Mrs. FirstInitial Lastname." 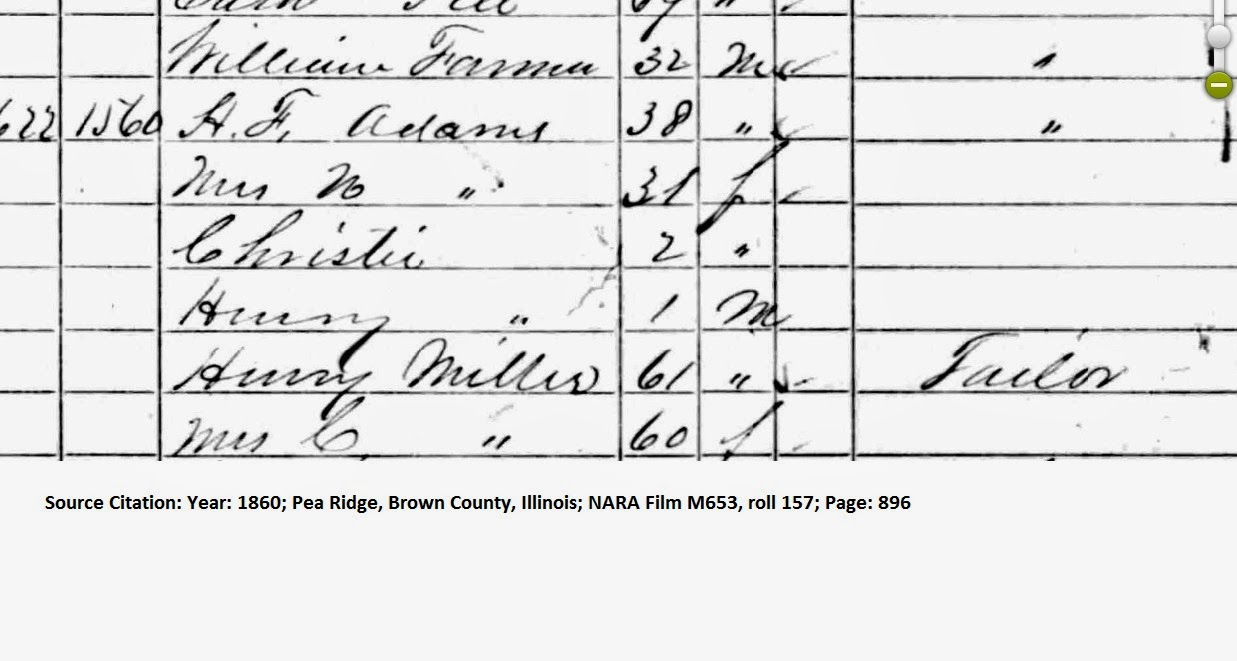 The Millers cannot be located in 1870. I'm still working on locating that enumeration, but quick approaches have not been successful and a detailed study and search via the family structure may be necessary. The Millers probably are still living with the Adams family, although is possible that they are living with or near their other married daughter, Heipke Mueller Dirks in Adams County, Illinois.

In 1880, Henry Miller is indicated as being a father-in-law in the household of Henry Adams in Brown County, Illinois. Except the entry for the 81-year old is crossed off  on the census sheet which is dated 12 June 1880. The instructions indicated that only people living in the household on 1 June 1880 should be listed. 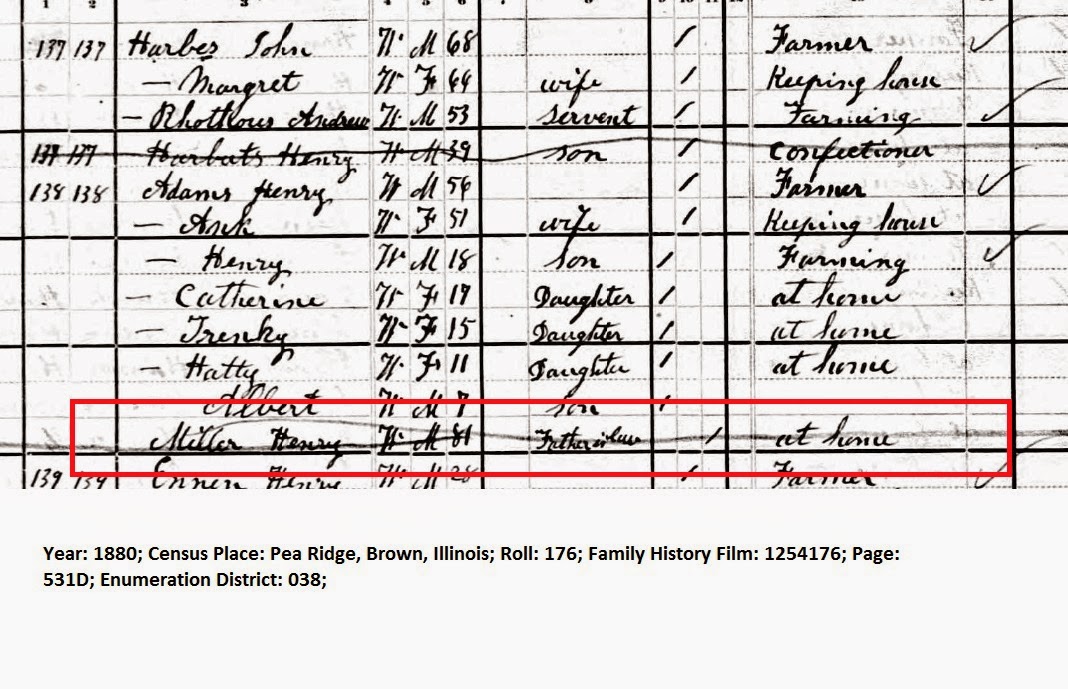 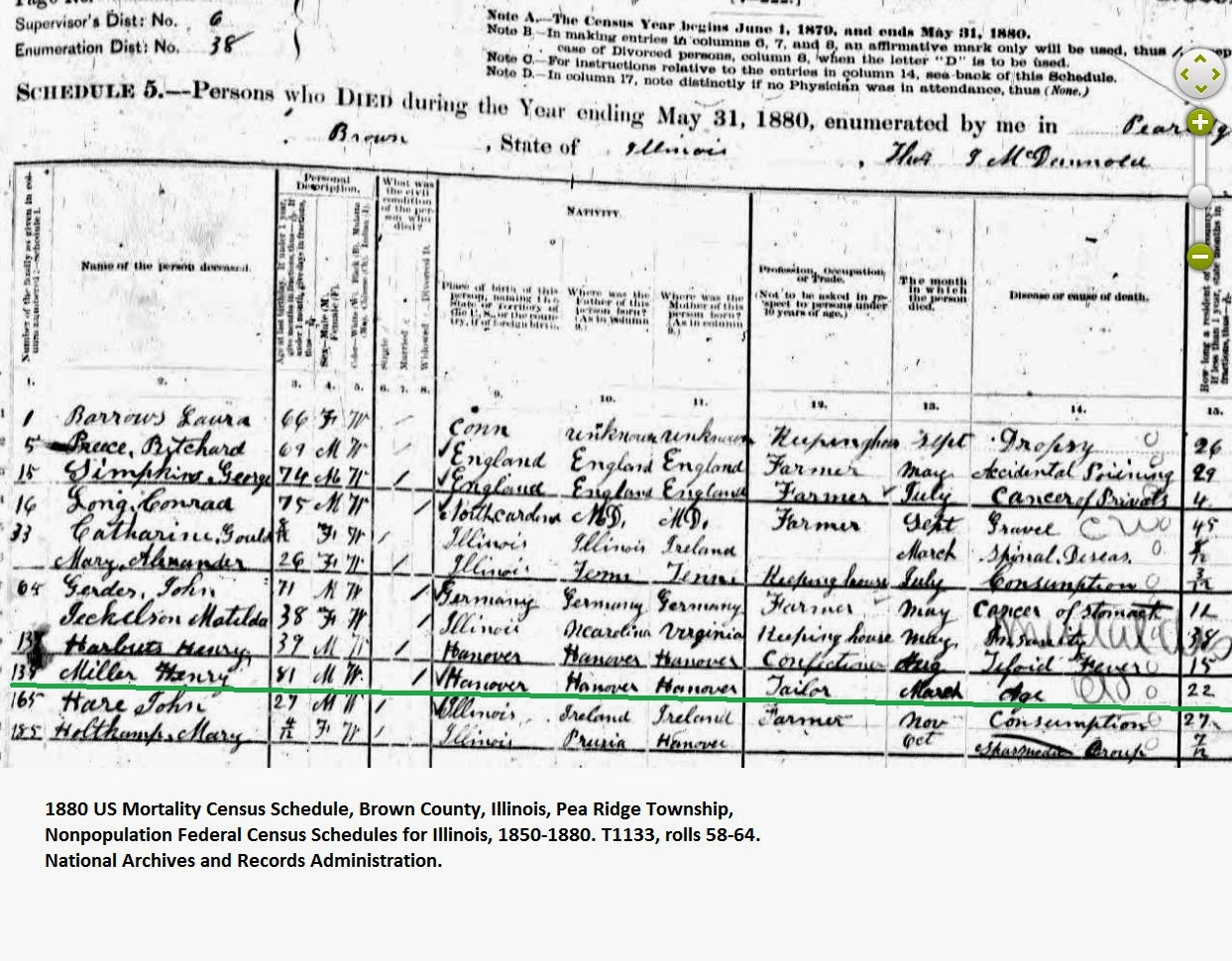 So why was he listed as being in the household of his son-in-law on 1 June.

The only explanation is that someone was confused or misunderstood the instructions. Henry cannot have died in March of 1880 and been alive on 1 June 1880.

The other name crossed out on the same census page in the household before the Adamses is Henry Harberts. The 1880 mortality schedule indicates he died in August of 1879 making his listing in the 1880 population schedule all the more confusing as more time has elapsed.

I started this census search with the hope of finding the Millers in an actual passenger list. The 1880 mortality schedule and Henry's enumeration while dead, got me slightly distracted.

The mortality reference indicated that Henry had lived for 22 years in the county where he died. That may come in helpful locating a passenger manifest entry--assuming it is correct.