As a rule of thumb, death certificates where informants only knew the deceased towards the end of their life tend to be suspect. This death certificate for Montvill Harness is no different. 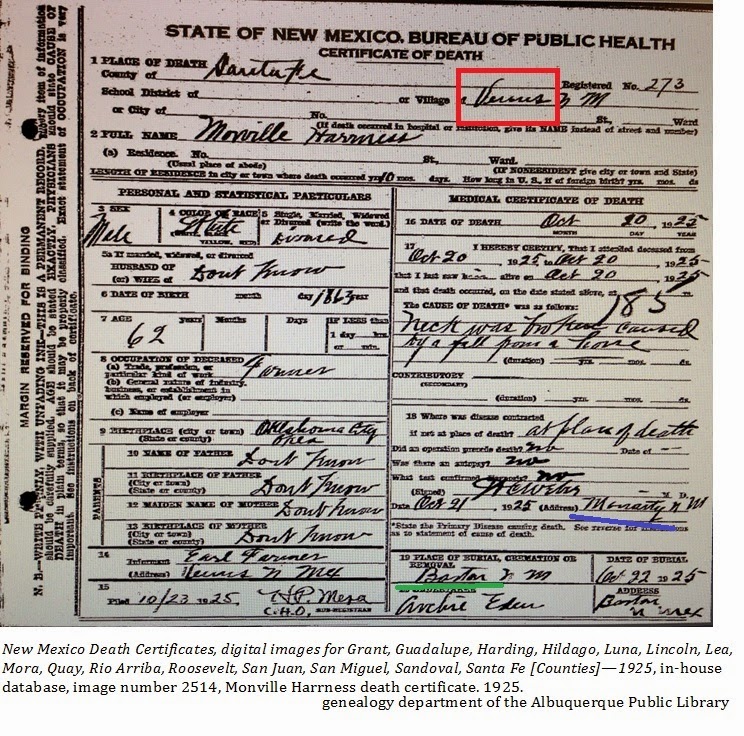 We've talked about Montvill before, but haven't really looked at the place of birth given on his 1925 death certificate from New Mexico.

It indicates he was born in Oklahoma City, Oklahoma, in 1863. While it is possible that Harness was born in Indian Territory in the 1860s, all other extant records indicate that he was born in Illinois. This is the only record that provides an Oklahoma place of birth.

Simply because Oklahoma didn't exist by that name in 1863 doesn't mean the location is wrong. Locations exist well before they have names and people can easily be born in "unnamed" locations that later have named.. Montvill did live in Oklahoma for a time before going to New Mexico and it is possible that for this reason the informant concluded he was born there for that reason.

Of course, I would transcribe the document as written and include my commentary about the likely reason for the error in my notes.

And in my final analysis and proof argument regarding Montvill's place of birth, I would include this record and why I think it is incorrect. I would include it because 1925 era death certificates are logically places to look for information regarding place of birth and leaving it out would make it appear as if the research was incomplete.