More Pulling from User-Submitted Trees and More to Virtually Ignore 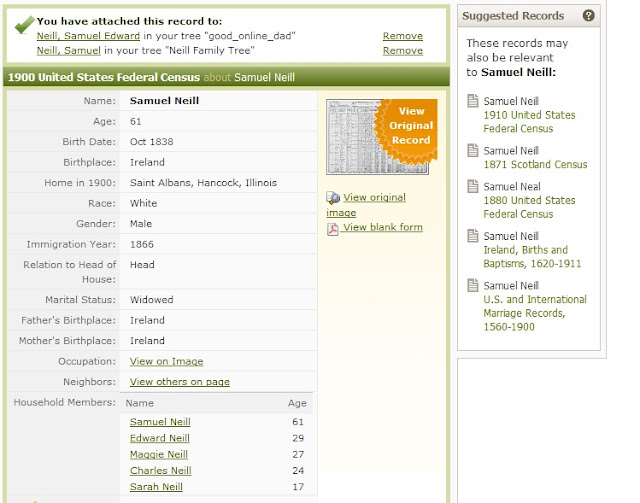 I promise I will not post any more of these today.

This is the 1900 census "extraction" at Ancestry.com for Samuel Neill. The "Suggested Records" includes several items (at the time of this post):


The 1871 Scotland Census and Ireland Births and Baptisms references are only included because someone has linked them (incorrectly) to a Samuel Neill to which they have linked the three correct references. These two references were not in suggestions for Samuel several months ago--because I looked although I wish I had printed out the screens.

I usually avoid the user-submitted trees for a variety of reasons. Now it looks like it is even more difficult to avoid the trees because linked records in the trees are being included in the list of suggestions.

I am new at this whole game so I am looking at the suggested trees as a "you might look over there" but not as "this is who you're looking for". My 5th grade math teacher always said to show our work. If I can't prove it, it's in a separate file. Am I on the right track? I'm finding trees back to the 1600's without any documentation to back them up, and I know some are wrong.