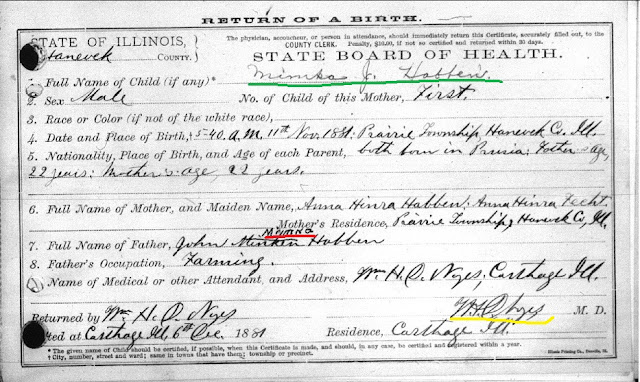 I've been thinking about this 1881 birth certificate for my great-grandfather.

It appears that there are four different sets of handwriting on it. The bulk of the handwriting is from the same person and I've not underlined that handwriting.

There appear to have been three other individuals write on this document besides the person who filled out the bulk of it.

The green is clearly a different hand--probably done later after great-grandfather had been named. Hard telling when this was done.

The red writing is a "correction" of the father's middle name. Mimken was actually the middle name as John's birth (and his first name was actually Jann). When this was done is difficult to say. It could have been done by the person who filled out the actual certificate--execpt that they printed in the correction. Without looking at the original it is difficult to see if the ink is really different or not.

I think that the doctor signed (yellow underlining). It doesn't appear that the doctor completed the form based upon the way he made the letters in his name and the general appearance of the script.

What I really need to do if I want a better idea is to see the original. Then the color of the ink would be more obvious.

-------------------------Reminder--we don't include complete citations on blog posts--just our personal preference. Complete citations are always included in Casefile Clues or you can learn about citations in Elizabeth Shown Mills' Evidence Explained. We always do include enough background information in blog posts that readers can find our original sources.If you think we don't, please fire off an email to me at mjnrootdig@gmail.com
Posted by Bubba at 10:17 AM