From Whence These New York Marriages? 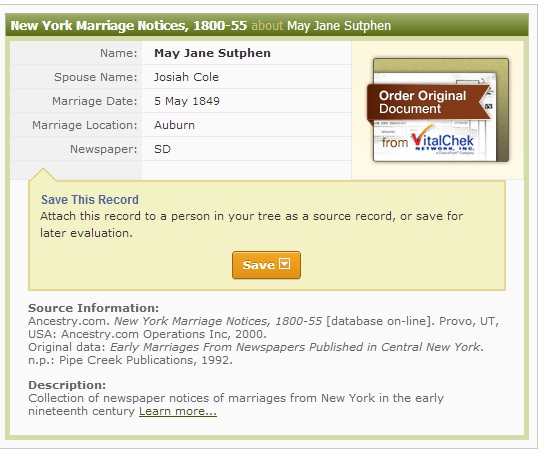 That's all fine and good, but I was unable to determine if there was a listing indicating what newspaper the items were from. The one shown in the illustration here has a code of "SD." Others had different codes and, in my quick survey of the site, I could not find a listing of the abbreviations.

The description, shown below, was not helpful:

Among the most important states in the young union, New York was home to over a million people in the early 1800s. This database is a collection of marriage notices published in newspapers around the state in the first half the nineteenth century. Each record contains the names of bride and groom, marriage date, marriage location, residence, and newspaper in which the notice appeared. Additional information is provided which in many cases includes names of witnesses, relatives, and parents. For those seeking ancestors from New York after 1800, this can be an informative database.


Frankly that description sounds like boilerplate text to me and could apply to a variety of items.

Hopefully someone will indicate that I've overlooked the list of abbreviations. It would have been nice for them to have been included and I'm hoping they are buried on the Ancestry.com site and I simply have not found them. Having the abbreviations in the description would have been helpful.

Found the book "Early Marriages from Newspapers Published in Central New York, 1992" in Google Books, and here's a direct link to the page defining the codes

SD is the Skaneateles Democrat

Given that the book was a "recent print," I didn't think it would even be in Google Books due to copyright restrictions.

Guess it pays to look there even if the material is recent.

Note to others: the URL John gave is correct, but won't link in the comments here. Copy and paste it into your browser window and it should work--it just did for me.