Rampley Was Not Exactly A College Student in 1893

I think I've got the answer to why the "college" attendee of the 1890s indicated in the 1940 census that he had only gone through the 6th grade. It wasn't the census that was wrong. It was my research that was incomplete. 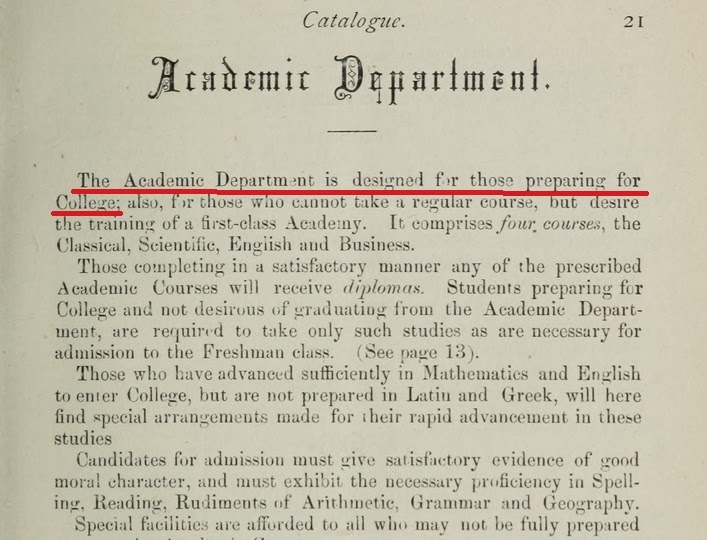 Edward Rampley was in the "Middle and Junior Classes" of the Academic Department which is descried in the image above. The Academic Department was "designed for those preparing for college." When I went back and read the pages before the Rampley entry, there were entries for the "College" and the senior, junior, sophomore, and freshmen classes within the College. The "Academic Department" was styled as an "Academy" in the catalog, but was intended to prepare students for college work.

The 1940 census for Rampley implies a birth year of approximately 1879. This is consistent with what is known about Rampley. This would have made him approximately 14 when he attended in 1893--a little young for traditional college attendance during this time period.

What I also could have done, but chose not to based upon these two discoveries, was to have searched for Rampley's classmates in the census to approximate their ages. If the description of the "Academic Department" had not made the purpose of it clear, the ages of Rampley's classmates might have suggested that he really was not attending the College itself.


The original post about James Edward Rampley is here.
Posted by Bubba at 12:06 AM