Rufus D. Stephens and Other Early Settlers--Are There Clues Sitting There?

I'm returning to Rufus D. Stephens in hopes of making some headway on this War of 1812 veteran from Ontario County, New York.

An 1851 "History of the Pioneer Settlement of Philps and Gorham's Purchase and Morris' Reserve...," by O. Turner (published in Rochester by William Alling) mentions Rufus D. Stephens and several other early settlers in his portion of Ontario County, New York as shown below in this portion of page 525: 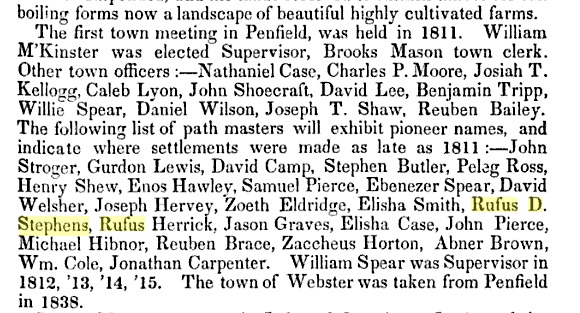 It has been a little while since I've mentioned Rufus D. Stephens, but I believe this one is the same Rufus D. Stephens who appears in Ontario, Canada, and Michigan through the early 1850s.

The problem is that there are two Rufus Stephens in New York in and around 1810--the 1810 census lists one in Lewis County and this one in Ontario County, New York. Newspaper accounts of a manslaughter case suggest that there was a Rufus D. Stephens in Herkimer County between 1800 and 1810.

The question is whether or not the Herkimer County Rufus D. Stephens in the one who appears in Ontario County.

Under the premise that people travel in general clusters, I am going to look for the names in this list of early settlers in the 1810 and 1800 census, hoping to see where they were from. The hope is that several of them were from Herkimer County, which would lend some credence to the theory that Rufus D. in Ontario County is the same one that was in Herkimer County.

That most certainly would not be direct evidence.

But it would help.