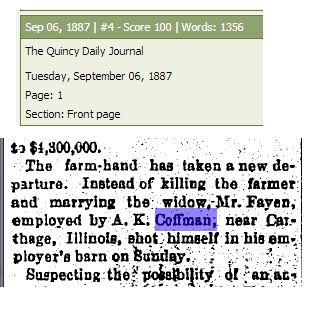 Sometimes the fault is with the site, not the researcher.
In 1887 a Hancock County, Illinois, farm hand kills himself. The event is mentioned in a letter written by my great-great-grandmother Noentje Ufkes in which she refers to him as Dirk Frieden. The newspaper reference to the apparent same event refers to him as a "Mr. Fayen." Since my great-great-grandmother wrote about the man in a letter to relatives, I assumed that the farm hand was an Ostfriesen immigrant as the Ufkes family was. I was also hoping to find him in the records of the nearby Immanuel Lutheran Church which most of the Ostfriesen immgirants attended--published online at Archives.com

That was easier to say than it was to do.

I decided to find a match in the funeral records of the church and browse until I found the funeral entries for 1887. Then I could manually view those entries for a name that could Frieden.

Noentje Ufkes died in 1902 and was buried from Immanual. Her entry was easily located.

I tried Julie Cahill Tarr's suggested trick, but it didn't work. I changed the ImageID number in the URl for the 1902 funeral entry image to the previous number. Last time I checked 1 less than 114 is 113.

It would be easier if Archives.com would simply let me browse the images. My only option now-hoping the records from the 1880 era are actually on the site-is to find relatives in my database who attended Immanuel and died in the late 1880s.

I shouldn't have to do that.

It's not just me.

And sometimes it is not just you.