A Rampley Goes to College in the 1890s

Nothing is ever as it seems on the surface.

Mocavo.com has a database entitled "Carthage College Catalog 1890-1895." I was surprised to notice the name of a probable relative, Edward Rampley, showing as a member of the "Middle and Junior Classes." 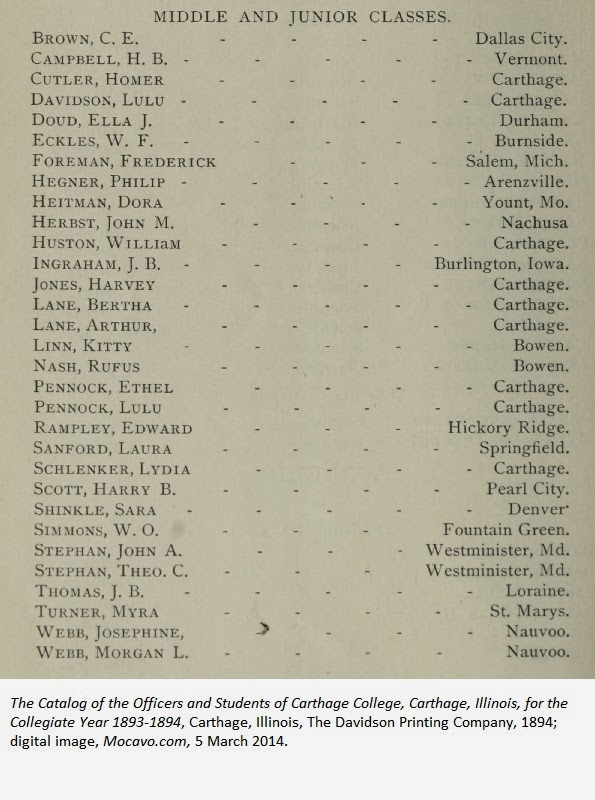 I was surprised for two reasons. The first was that I never thought of looking for any of my paternal relatives in a college setting before World War I. All my families during this time period were rural and didn't attend college. Generally speaking, members of both families attended school to the point of being able to read, ride, and perform basic arithmetic. That's what farmers neededto be able to do. This usually meant grade school attendance or maybe going through the eighth grade. None of my family during this time attended high school, let alone college.

The second thing that struck me was that a paternal relative attended. Carthage College is affiliated with the Lutheran Church and was located in Carthage through the 1950s (today it is in Kenosha, Wisconsin). My father's family were members of a variety of Protestant denominations, but most were not Lutheran. My mother's family was Lutheran, very German Lutheran. Several of my mother's aunts and uncles attended or graduated from Carthage College and numerous other family members either attended for a time or graduated as well.

Another thing didn't make sense. I didn't remember seeing any relative of Edward's generation indicate college education in their 1940 census enumeration. The first member of my father's family to attend college was my Grandpa Neill's sister who graduated in the 1930s. I'd located all my "immediate" family in 1940 and would have noticed college for someone of Edward's age in 1940.

Sure enough, reviewing Edward's 1940 enumeration indicated he only attended through the 6th grade. He obviously didn't just "guess" at the educational levels as he indicated his son Lester had completed three years of high school.

Enumerated as "James Edward" in 1940, I was fairly certain the Edward in the Carthage College listing was the same person. James Edward Rampley was the son of James Rampley, who in turn was the son of another James Rampley. When James Edward was born, he would have been the third James. Even thought James the grandfather died in 1884, it doesn't seem odd that James Edward would still be using Edward in the 1890s. Nicknames tend to stick. In fact the 1920 and 1930 census enumerations show him as J. Edward and Edward respectively (both in Walker Township as in 1940).

However, I wanted to be certain that I had the right person in the college listing. The college catalog appears to leave off the name of the state when the intended residence is in Illinois. There's only one Breckenridge in Illinois--located in Hancock County, Illinois, in the same township where James Edward is living in 1940.

My memory told me there was no other Edward in the time period, but memory can be wrong, so...

I reviewed the other Rampleys in the Breckenridge area who would have been of an age to attend Carthage College in 1894. They were all first cousins of James Edward and are relatively well-documented. There were no other Rampleys with Edward as a middle or first name. The reference to the Edward Rampley in the 1894 college catalog has to be same person as in the 1940 census listing above.

But if James Edward provided the information himself in 1940 (indicated by the "x") how could he mix up attended college with going through the 6th grade? Was the census taker incorrect?

We'll have an answer to that in a future post. Stay tuned.