98 Years of Marriage and a 7:30 Evening Wedding


The entry for my great-grandparents is not the only Ufkes entry on the page. There are entries for two of his siblings as well. His brother Gerd married in 1915 (entry 62 which has been underlined in green) and his sister Lina married in 1917 (entry 66 which has been underlined in red).  Great-grandma Trientje was also born in Bear Creek Township to Jans Janssen and Friedericka M. Sartorius. Her family was not as large as her husbands or she probably would have had siblings with marriage entries on the same page as well. 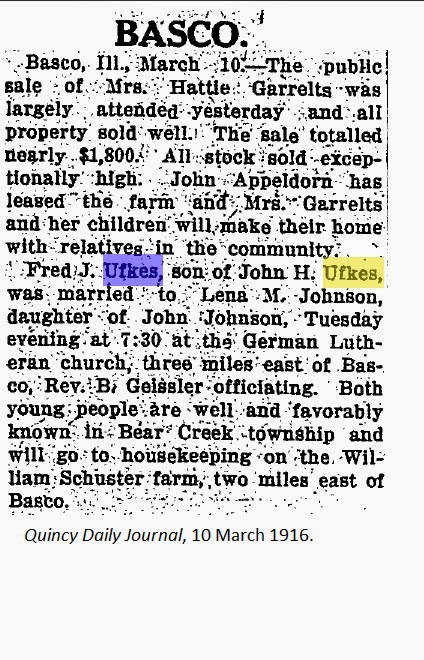 The church register makes no mention of the time of the marriage, but an entry in the Quincy Daily Journal from 10 March 1916 mentions the ceremony as having taken place at 7:30 p.m. on Tuesday. I never really gave much thought to the time of day the ceremony took place although spring marriages during this time period were fairly common.

The newspaper account indicates the couple were "favorably known" and would take up housekeeping on the William Schuster farm, two miles east of Basco. That would not have been far from where Ufkes grew up which was also east of Basco. A plat map hopefully will confirm the location.

In fact, Fred grew up in the shadow of the Immanuel Lutheran Church as indicated in this picture of him taken on his parents farm some time before his marriage.

I've mentioned the picture before, but if one looks closely an outline of a church can be seen in the background on the left hand side "above" the fence. That's the Immanuel Lutheran Church. 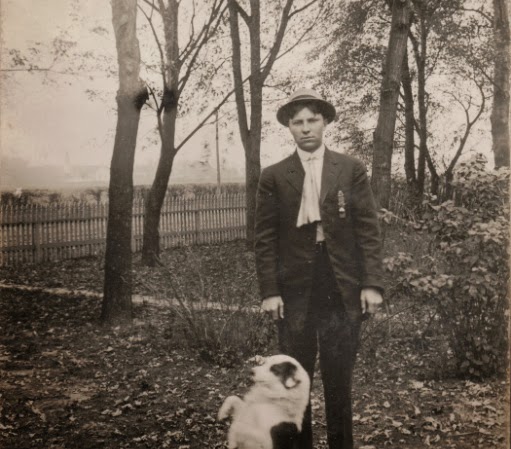 Fred and Tena later moved back to the farm where he grew up sometime after their marriage and sometime before 1924 when his father John H. Ufkes died. After 1924 they stopped attending the nearby church and started attending Trinity Lutheran Church in Carthage.

But that's another story.
Posted by Bubba at 9:04 AM