Images are Sometimes Tied to the Wrong Database

There are not many individuals in Ancestry.com's database with the name of Jurgen Goldenstein. One of them is my uncle (brother to Tjode [Goldenstein] Habben, 1882-1954, my great-grandmother). The other one is likely a cousin.

A search of Ancestry.com indicated several hits in military records for Jurgen which was not surprising. One struck my attention because Jurgen was born in 1903/1904. The reference indicated Jurgen had a muster date of December 1913 in the Marines. I knew my uncle was in the Marines, but the muster year of 1913 would have to imply there was yet another Jurgen. 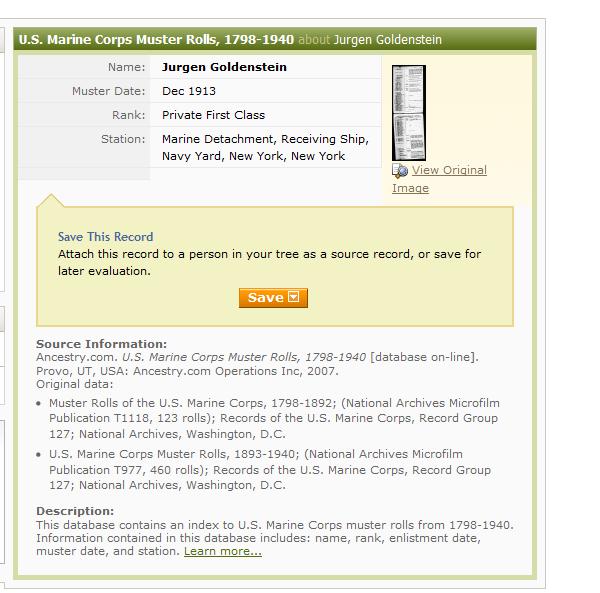 Alas, there was not. When I viewed the "original image" the heading still said 1913, but it was clear that the records that I was viewing were from later than that as events taking place in 1934, 1937, and 1938 are mentioned. It is not clear from the way Ancestry.com has linked the images, just what roll of microfilm this record is from. I'm guessing it really is for my uncle, but I'll have to do a little digging to make certain. This is the time frame when uncle Jurgen served, but I'll have to correlate everything to make certain this isn't another Jurgen. I really doubt that is the case. 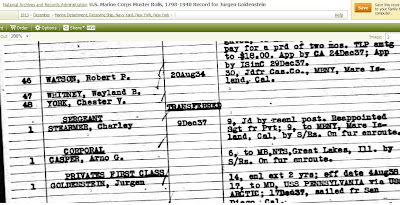 I've submitted the error report to Ancestry.com, but heaven only knows how long it will take for it to be fixed. Double check and even when Ancestry.com indicates the source of the image that can be incorrect.

Original Image?
Ancestry.com's results screen has a link for "View Original Image." I'm not certain that term is really correct, but that's a blog post for another day.
Posted by Bubba at 5:38 PM