This is only part of a scan of the original bounty land warrant issued to Catherine Blain based upon the
Revolutionary War service of her husband, Elam Blain.

This is the first time I have received high-quality TIFF scans of  the documents instead of photocopies. Now I know that the photocopies do not do the original documents justice. These materials are in addition to the pension materials and application for the Blains which I had already obtained from  Fold3.com. The pension indicated that Blain received a warrant and that a patent was issued based upon that warrant so I knew there should have been a surrendered warrant in addition to the pension.

The warrant was assigned by Catherine to her son Elam. Part of that assignment (which is on the reverse of the document is shown in the image below:

I didn't include the whole image of the reverse, but you can see the bleed through. This is the corner where Catherine made her mark and you can see that she's assigning the warrant to Elam Blain. Blain also assigned the warrant again to the man who actually applied for and received a patent.

Here's a smaller image of the whole warrant: 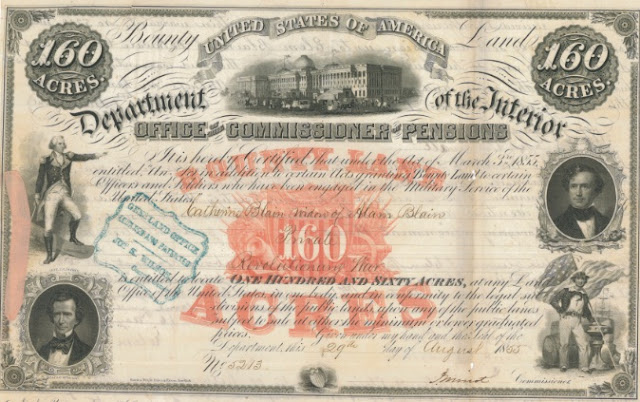 Remember--the pension applications have been microfilmed by NARA and are available on film and online at Fold3.com

. The surrendered warrants have not been filmed.

We're working on a Casefile Clues article on these records. Pretty neat stuff.

These materials come from Alam Blain surrendered Bounty land warrant file - RO49-BLW # 5213-160-5, which is from National Archives Record Group 49. I know that's not a perfect citation, but for posts on Rootdig, I'm operating under enough detail to re-obtain it is sufficient.
Posted by Bubba at 8:13 PM