(originally published in the Ancestry Daily News on 16 November 2005)

Whether he signed with a flourish, scribbled out a scrawl, or literally made his mark, seeing your ancestor’s “signature” provides a different perspective especially when pictures and images are not available. This week we look at some places where you might find traces of your ancestor’s handwriting among the records.

Estate Records
In 1861, Melinda Newman relinquished her right to administer the estate of her deceased husband. She signed the document. Another paper from the estate file contains the signatures of several of her children who were acting as either administrators of the estate or bondsmen. Receipts and other documents in the file could contain signatures of heirs or others with an involvement in the estate.

Court Records
Was your ancestor involved in a court case? If so did he sign any of the documents in the case file? Early court records usually consist of transcriptions of various records, but later materials should contain the actual papers filed while the case was active. If the legal action dragged on over several years, you may find numerous copies of your ancestor’s signature.

Petitions
Did your ancestor sign any petitions? State, regional, or local archives may have copies of various petitions, such as ones to build a new road, establish a new county, remove a county official, etc. The difficulty is that many of these records are unindexed and locating them requires diligence. My own ancestor signed a Maryland petition during the Revolutionary War protesting the selling of real estate by the colonial government. The property being sold was owned by a British subject and rented by my ancestor.

Marriage Records
Your ancestor’s marriage record may contain his signature, if the record is relatively recent (early records frequently just list names and dates). If your ancestor served as a bondsman on his relative’s marriage bond his signature as bondsman should be included. If your ancestor gave consent for a child to marry, the consent may be simply noted as “parental consent” without even a name specified. If you are lucky, the parent’s signature has been scrawled on the record. Consider marriages your ancestor could have witnessed as well. My own ancestor’s 1907 marriage contains a sibling of the groom and a sibling of the bride as witnesses. Both signed the marriage license.

Note Holder
Did your ancestor loan money to someone else? If the loan was secured by real estate, a mortgage should have been recorded in the jurisdiction where the property was located. A release of mortgage may have been recorded when the debt was paid, filed in a separate series of documents or perhaps recorded right on the mortgage copy itself. The transcriptions recorded separately likely do not contain your ancestor’s signature, but the notation made on the copy might. In this case, the clerk writes a note in the margin of the recorded mortgage indicating that it has been paid. The holder of the note signs under the clerk’s note, right in the record book indicating that the property is now free and clear. Antje Fecht signed such a release on a mortgage to her son-in-law in Illinois in the 1890s. It was a great place for me to get my third great-grandmother’s signature.

Pension Records
If your ancestor filed for a pension, there’s a good chance his signature is on one of the application papers. In some cases, there may be many copies of his signature throughout the file. If his widow later filed for a widow’s pension, her signature may also appear in the same set of documents.

World War I Draft Cards
Was your ancestor of an age to register for this draft? If so, his signature should appear at the bottom of his card. All of these cards are available to the public via microfilm and are now indexed and available to Ancestry.com subscribers.

World War II Draft Cards
Was your ancestor required to register for the World War II draft? Cards are available to any interested person for men born between 28 April 1877 and 16 February 1897 and were mentioned in an earlier column. Draft cards after that date are available subject to restrictions from the Selective Service Administration and were also mentioned in an earlier column.

SS-5 Applications
If your ancestor completed their own SS-5 form (Application for a Social Security and Tax Account Number), their signature should be at the bottom of the form. These forms are available from the Social Security Administration for any deceased individual with a social security number. More information about obtaining copies of the SS-5 forms can be obtained here.

Birth Records
If your ancestor’s birth was recorded in a timely fashion, she likely did not sign the record, regardless of how precocious she was. However, you may find that your relative’s parents signed the relative’s birth certificate. It happened. This signature will not be obtained if you receive a transcription of the record instead of an actual copy. My birth certificate has my mother’s signature. The copy I obtained when I first started genealogy is a copy of the actual record, including Mom’s signature. The copy I obtained as proof of citizenship is simply a transcription of the document (minus Mom’s signature). My oldest daughter’s birth certificate has the signatures of both her parents, not just the mother. Recordkeeping practices do change over time (I did not have to sign my youngest daughter’s birth certificate, but was required to sign the oldest one‘s because I was named as the father). If your ancestor obtained a delayed certificate, his own signature likely is included. Signatures of other relatives may also appear in delayed birth recordings.

Death Certificates
If your ancestor signed his own death certificate, I’d love to see a copy! The more likely scenario is that a family member was an informant on a relative’s death record and signed the document. Knowing the name of the informant on a relative’s death record is usually enlightening as it puts the information provided in perspective. It is even better when the signature is that of one of your ancestors.

Home Sources
Letters, diaries, and other materials in your home (or your relatives’ homes) may contain the signature of your ancestor and even more of her handwriting. Greeting cards are another good source of more recent ancestral signatures.

Extended Family Approach
It has been hinted at in some of the record sources mentioned, but records on your ancestor’s siblings or cousins may contain her actual signature. This is particularly true for those records where siblings might have had to provide testimony or signed an affidavit. Some military pension files are full of signatures of other family members (in addition to neighbors, justices of the peace and other individuals).

Other Places
We have scratched the surface of places where your ancestor may have literally “left his mark.” Considering searching for your ancestor’s handwriting. You may learn more about her than just how she crossed her “t.”

I'll be perfectly frank. I don't read many genealogy blogs. There are many reasons for this, but the following things cause me to click "back" fairly quickly:
If these seem a little harsh, then so be it.
Posted by Bubba at 9:39 AM 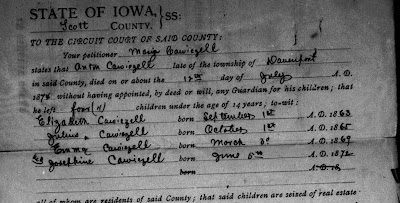 This really was an unexpected discovery when I was at the Family History Library in Salt Lake City last month.
In some "spare" time, I decided to make digital scans of records I had only copied selected materials from years ago and was focused on probate records from Scott County, Iowa. Early in my research on this family, I had never bothered to look for a guardianship on the children of Anton Cawiezell. There was no good reason, but my assumption at the was probably that since he was a blacksmith living in Davenport, Iowa, there wouldn't even be such a record. Sure enough there was.
This is one image from the file which gives Anton's date of death--which I did not have. Also included are the dates of birth for his children who were minors at the time of his death. All of this is helpful as there are no civil records in Iowa during this time period and I could find no church or other record of Anton's death.
Turns out Anton owned twenty acres of property and some livestock.
I'll have to followup on Anton as there may be more than I know.
Always pays to go back and review materials located early in your research.
Posted by Bubba at 6:38 PM

Why You Should Read Those "Intro" Materials 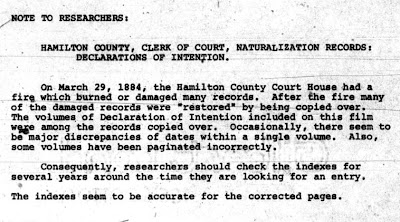 This is a page that appears before a microfilmed copy of declarations of intent for Hamilton County, Ohio between 1848-1851 (Family History Library film 1415117). A big clue that something was different about these records would be the consistent handwriting from one page to the next and the fact that every signature was the same.

This might explain why I am having trouble finding the arrival of Peter Bigger on a date that matches the one on his declaration of intent that appears on this roll of microfilm.

Read those introductions--you might realize you've overlooked something.
Posted by Bubba at 11:41 PM

Thinking About the Allen County Public Library for my Group Trip

I'm starting to think about what I'm going to research while I'm at the Allen County Public Library in Ft. Wayne in August with my group from 3-7 August 2011. The library is particularly strong in published materials as well as some microfilm.
Since I haven't done too much work on my New England lines, I'm going to focus on families from New York State, Vermont, New Hampshire, and Massachusetts. I'll try and avoid using Ancestry.com at the library as I can use that at home.
I'm working on my list of people and will be adding an update as well. I'm hoping to put together material I obtained in Salt Lake and other places to start some searches for the parents of apparent brothers Benjamin and Arvin Butler.
I'm also hoping to work through some published material on the ancestors of Clark Sargent, born in Vermont in the mid 1810s.
I copied some tax and other materials from Hunterdon County, New Jersey, on the Blaine and Reed families and I'm hoping to make a little progress on them in the Revolutionary era.
The Library also has some microfilmed tax lists and I'll see if there are any locations where I need those records as well.
That will probably be enough as I'll be helping the trip participants as well.
The Library's genealogy page is here.
Information on our trip is here. We'd love to have you join us.
Posted by Bubba at 5:33 PM

Subscribers to Casefile Clues for Beginners will get a free copy of my article from 2010: "Problem-Solving."

Previous subscribers will be sent their copy over the next few days. New subscribers to Casefile Clues for Beginners will get their copy within a few days of subscribing.