Is a Two Year Old A Witness? 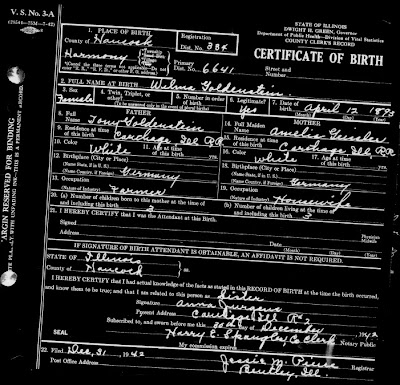 This is the birth certificate for "Wilma Goldenstein" which was filed in Hancock County, Illinois, in 1942. I noticed the entry for Wilma on the index at FamilySearch and thought it looked suspicious.

And frankly, it still does.

Wilma was not a popular name in 1893 when this child was born. My suspicion is that the person in question used Wilma as a name later in life which is why it was the name used on this 1942 delayed certificate.

The sister of Wilma is the witness--Anna Jurgens. She is another interesting question. She would have been two at the time of "Wilma"'s birth. Does that make her a credible witness as to the date and place of birth?

The family is living in Prairie Township, Hancock County, Illinois, in 1900. A partial clip of their census entry is shown below.

Wilma is Minnie on this enumeration and my guess is that her name was really Wilhelmina. The month and year of birth on the census matches the one on the delayed certificate. Anna was barely two years older than her sister.

The "delayed" birth certificate was actually filed with the original 1893 certificates--perhaps to keep things organized.

Think about who provides information on those delayed records. Did they have first hand knowledge of everything to which they were testifying?