I'll admit that I did not know what a dragoon was.

The first image in this post is the heading from the roll from Captain John Heard's troops in the 4th Regiment of Light Dragoons, Continental Troops.

This is a great example where cutting too much from the image can create problems. The date in Alaim's entry is when he enlisted, the number 3 is for the number of years and the last "Do" is the state he was from.

Looking at the entries above Alaim, it's clear that he enlisted on 12 June 1778 and that he was from New Jersey. There were several enlistments on the same day from New Jersey--possible they knew each other. I need those name as well. Of course I would have had all this if I had just copied and saved the whole image. But if I had not really thought about it, it could have been overlooked. 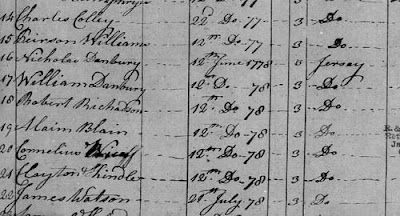 If I didn't know where Alaim was from in New Jersey, the names of these fellow enlistments could have been helpful.

Sometimes it's better if I look at the page in pieces---more clues are sometimes obtained that way.