This application card for a military tombstone is a wonderful document. These records were recently released on Ancestry.com .  The card got me to thinking about more than just the person who was named on the record.

The back of the card

Those hyphens can cause trouble


This is a death notice of Samuel Sargent that appeared in a newspaper in Concord, New Hampshire, shortly after his death in 1819. There are times when I use the town of residence as a search term when searching on   Genealogybank.com.

This time there's a slight problem with using Marlborough as a search term. Actually, there are two considerations. In some instances the word could be spelled without the final "h."

In this case using the town as a search term did not locate the image shown above because the town name is hyphenated.

Just something to keep in mind when creating and using search terms at any site that has digital images of newspapers or other items such as   Genealogybank.com.
Posted by Bubba at 9:51 PM

New United States materials on FamilySearch as of 30 November 2012

New US Materials at FamilySearch 29 November 2012

New at FamilySearch for United States as of 29 November 2012:

"Taken up by James Kile, a sorrel colt with a star on his forehead and a snip on his nose, no brand perceivable, supposed to be two years old next spring, about twelve and a half hands high--appraised to 15 dollars, by John Kile and Joseph, Fleming, appraisers.

"I certify the above to be a true copy from my estray book.

Notice of the stray doesn't tell me too much,  but it does indicate that James Kile was living in Truro Township, Franklin County, Ohio, in January of 1810. A John Kile, who is his likely brother, was most reasonably living nearby. This could help me to establish a time from their migration and also tell me that both  men were apparent neighbors in 1810.

All that from a found horse.

There's a really interesting map in the American Memory Collection at the Library of Congress showing the region of the city consumed by the Great Fire.


The image above shows part of the southern region of the city that was involved in the fire.

The map can be directly linked to here.

OTHER TITLES
Chicago, as it is, showing the burnt district
CREATED/PUBLISHED
[New York] : Gaylord Watson, 1871.
NOTES
From: Goodspeed's History of the great fires, New York, 1871

The map is a part of the American Memory Collection at the Library of Congress.

Two Reasons to View the Image

Thanks to the students in my "Organizing Genealogy Information" class for catching this transcription error. The screen shot below is the 1830 census enumeration for Augusta Newman that appears on  Ancestry.com 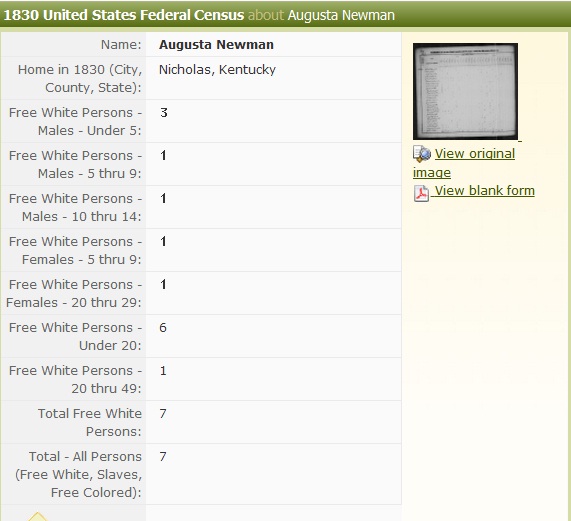 Just looking at this transcription, one would think that the oldest male in the household was one between the ages of 10 and 14. I'll be honest and say that I rarely read these pre-1850 census transcriptions.I prefer to look at the actual image. It turns out in this case doing so is a good idea.

Ancestry.com's transcriber left out the oldest male in the household--the tick mark can easily be seen on this part of the image below.

And, if you never look at the image you don't see the name right before Augusta: John Newman. The proximity of the name hints at a relationship between the two men.

You won't find that on the transcription either.

Organizing Genealogical Information:
A Short Course
With Michael John Neill
January 2013
(scroll down for specific schedule)
Organizing information is an important part of genealogical research—perhaps more important than the actual research. This short course (only 4 sessions) is intended to provide the students with exposure to a variety of ways to organize information with an emphasis on problem-solving. The course will consist of four lectures (topics and schedule below), problem assignments, virtual follow-up discussions, group discussion board interaction, and student submission of work (optional). There is no assigned grade—you get from this what you put into it. Students will also be able to share their work and ideas with other students.

Citation of sources is important, but lectures will not focus on citation theory.

Course registration is only $30 for thecourse. Class size is limited to 30 to encourage group interaction (and pay for our Gotomeeting subscription). Attendees will need to register by 8 AM Central Time on 29 December 2012. Class starts on 6 January 2013.

Lectures will be recorded for those who are unable to attend or have audio/video issues.

Lectures and discussions will be via GotoMeeting.

My "decimal point" post got me to thinking about Ancestry.com issues I've had that are currently unresolved or where I am waiting for a response. Those items are:


Ancestry.com is working (per an email) on how database search results are automatically incorporated into trees. I'll look and see if there are unresolved issues that I have encountered and add them to the list.

If you have other database search issues, please let me know.

Fourth Quarter Does Not Guarantee October 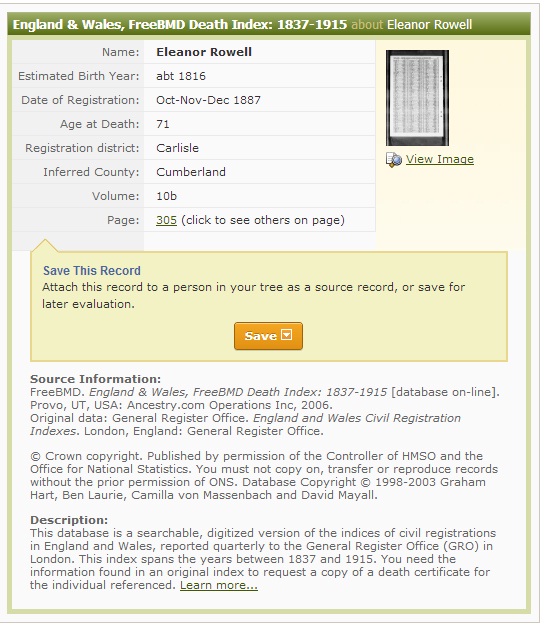 Yet if one clicks on the "save" button in order to save this information to a person in their database or (as I've done below) to use it to create a new person, the default is to show that Eleanor has a death date of October of 1887. That's not what the index says. She didn't necessarily die in October. In fact, there's an almost 67% chance that she did not die in October. 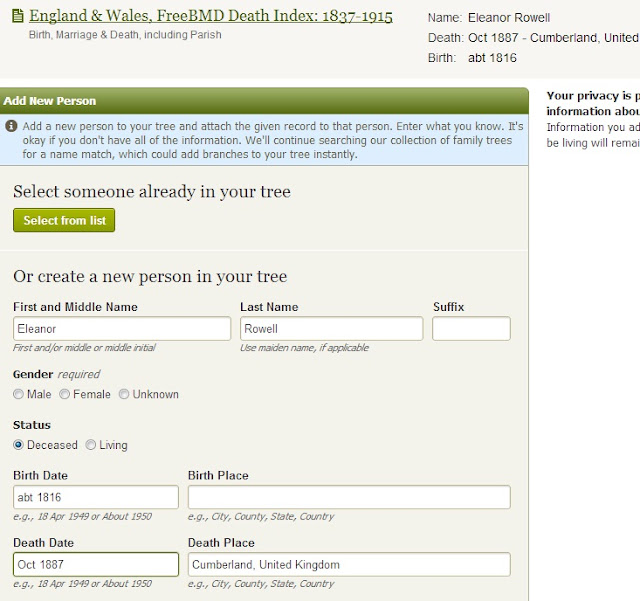 Why can't Ancestry.com simply have the year come up automatically in the box?

That would be correct and I wouldn't have to remember to change it every time.

This isn't a difficult fix and automating data entry is desirable--when it is done accurately.

Here's hoping Ancestry.com makes the fix, so that we don't have to.
Posted by Bubba at 1:21 PM

New Non-US databases on FamilySearch--last two weeks or so: