What Are You Missing By Relying on Those Ancestry.com Leaves?

Sometimes I wish I understood the leaves on Ancestry.com.

In getting ready for a seminar, I was using Ancestry.com's tree to save and organize some images on a few families that I'm going to be using as illustrations. In so doing, I came upon a person for whom Ancestry.com had several suggestions--via their leaves. Elizabeth (Watson) Frame was born ca. 1845 in England and was living in Chicago by the 1870s. 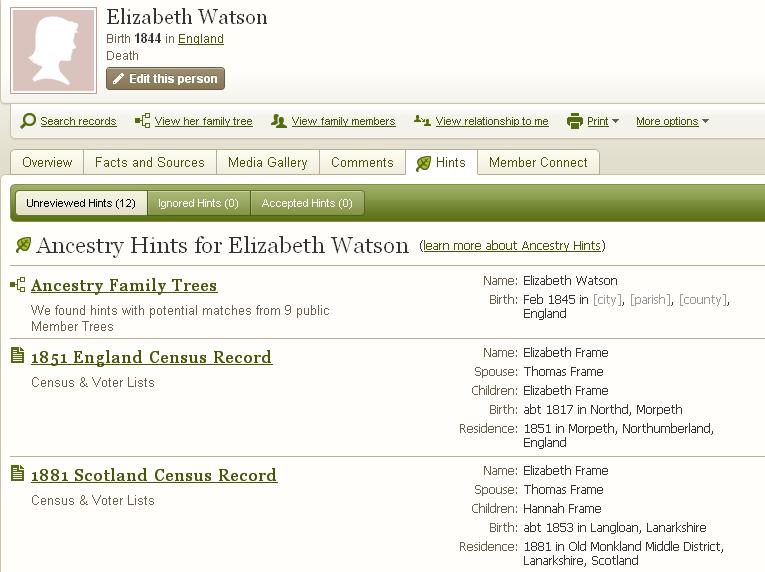 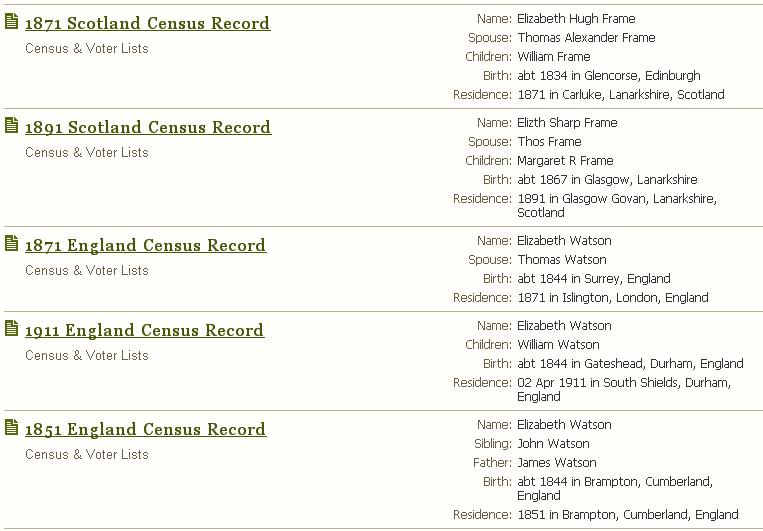 What I did not understand was why Ancestry.com didn't pull up hints for Elizabeth in United States Census records. Her 1870 enumeration clearly matches the birth parameters I have for her in the database. 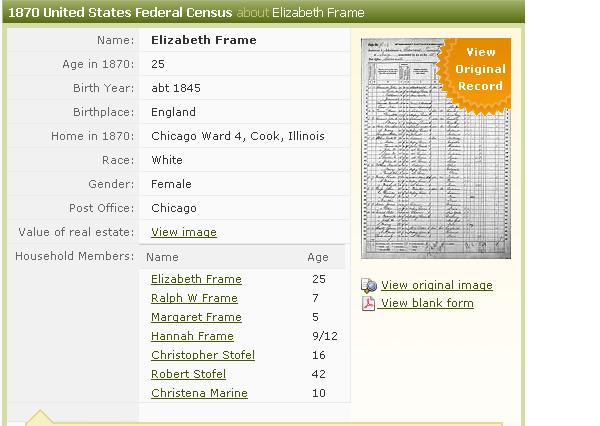 The birth year and place matched exactly what was in the Ancestry.com Tree match. It seems odd to me that the 1870 census match didn't appear on the list of potential matches for Elizabeth.

My information for Elizabeth originally didn't have any death place information entered. I put in a death place of Chicago, Cook, Illinois, thinking that the "matches" might include other records. Sure enough, two more suggestions appeared--both from Illinois death records. 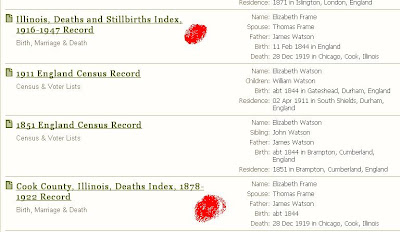 Makes no sense to me. I doubt I get an answer from Ancestry.com on WHY the search works the way it does.

Personally I don't use the leaves very often. My concern is that many people DO rely on them. I wonder what they are missing.

And now on those few times I use the leaves I wonder what I am MISSING.

Excellent observations. Using the leaves for anything but hints puts you on a very slippery slope! ;-)

I was (and still am) confused about the hints that came up on this one. I don't really use the leaves myself, but thought that they'd catch the "obvious" things which would make the prepping for my presentation a little faster.

It becomes more and more clear why some "newer" users get confused with them.

When I was at SLIG last winter, I attended a luncheon put on by Ancestry where I picked up some hints I didn't know about. One of the ones that stuck in my mind is that when you choose to do an Advanced Search and restrict records to a certain time or place (as opposed to the default settings), those restrictions are 'sticky' and stay that way for succeeding searches. The best way to turn this 'on' and 'off' is to check and then uncheck the box in the upper left "Match all terms exactly".

Is it possible that you have restricted a record search on this page so that US census records are excluded?

Still, sometimes the leaves catch things you haven't found (yet), so they are good in that sense. Certainly we shouldn't think they are doing all our searching for us. Many times it will bring up a father when the record is for the son with the same name (in spite of dates). But manual searching is always worthwhile, considering the number of things I've found varying what info I put in, especially on names that are butchered in the index.

Because I have several trees with the same information, I've noticed something. When I attach a record... guess what happens? I get a leaf on my other tree. It may not be instantly, it might occur until you get one of their email notifying you of matches. Their leaf system seems to mainly use the hard work of others to find matches. That's also why it can come up with incorrect suggestions or those that are way off or that seem way off. I'm sure it does some keyword matching, but I have a hunch, it mainly depends on the activity of others.

Wendy---I didn't restrict things at all, so that's not what's going on here but I'll have to remember that.

Saphyre--I've seen that on another person where the "suggestions" on a census results screen are pulling in matches that probably came from my tree where I had already connected the records to the same person. In that case, the person is listed in census records under two completely different last names and those new suggestions appeared after I linked all the census images to the same person. I think they are using the linkages made by others to give suggestions to other users.

That's not quite what's going on here as the matches I didn't get are ones that I really should have gotten given what I had in my file on Elizabeth.