This is the database entry for Benjamin Harm from the Nebraska, State Census, 1885 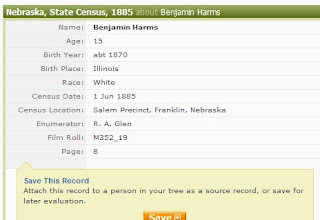 . The Harms reference shows in the first illustration could not be located in the Nebraska, State Census Collection, 1860-1885 and probably was indexed in some what that it could not be located. Using the information from the first screen, I was manually able to locate the desired entry which is partially shown in the image below. The Herman Harms family appears in the Franklin County 1885 Census on page 8 in Salem Precinct.