Sale Bills in the Case File 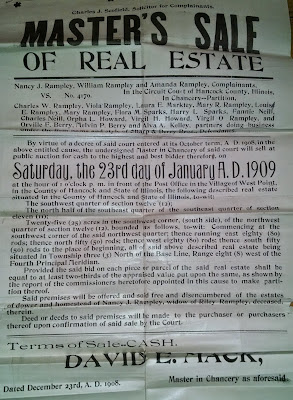 Once in a while other items may be bundled in with the more typical records.

This sale bill that was filed among the court papers in a 1908/1909 Hancock County, Illinois, court case involving the heirs of Riley Rampley is a good example of such an item. Often these actual bills aren't in the files, but sometimes they are.

There's nothing in here that's not in the actual records. There's a judge's order authorizing the date and place of the sale.

There's even a report documenting the public locations where this sale bill was placed in addition to publication in the newspaper.

Usually these items aren't smoking genealogical guns. But they are nice discoveries no matter what.
Posted by Bubba at 8:53 AM