He's A Murphy...But Which One? 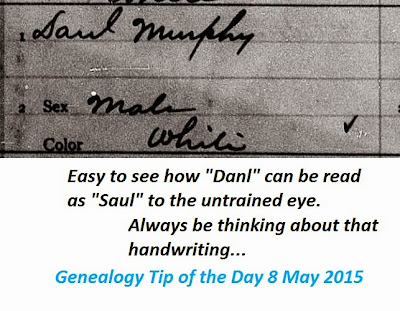 This was posted to the group page I have for Genealogy Tip of the Day on Facebook and it generated some discussion about how the first name could be reasonably interpreted. Our discussion was somewhat hypothetical as other handwriting on the page was not viewed. This was done intentionally as many indexes are created in just this way. The researcher who fails to acknowledge how some indexes are actually created are sometimes limited in their ability to utilize those indexes effectively.

It was fairly clear to me that the intended name here was "Danl"--- for Daniel. In looking at it myself, I could see how someone might think is was Saul.

Readers mentioned that it's also possible to interpret it as "Saml" or "Darel" It's difficult to seriously argue against Saml in this case if one has already indicated Saul is a reasonable interpretation. I would not have rendered it as "Darel," but it's easy to see that as well. No doubt there are other reasonable renderings of the name.

It's also easy to get stuck in an original interpretation of something and to occasionally fail to realize that there may be another equally valid way to view a piece or handwriting or a piece of information.

And if this Murphy man had brothers named Saul and Samuel--then that's a whole 'nuther problem.