Focke Dies Twice and Too Many Babies in 1906 Part II 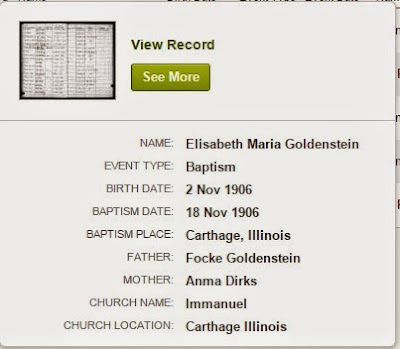 If one only looks at the database entries in the "Evangelical Lutheran Church of America, Records, 1875-1940" at Ancestry.com it's possible to draw some off-the-wall conclusions. That's true though with any index--not just those at Ancestry.com. Researchers who only look at index entries potentially create bigger problems than the actual records themselves. A look at the actual record may clear up what appears unusual when only looking at an index or database entry.

In Part I of this series, we looked at an entry from the Immanuel Lutheran Church in Golden, Illinois, that indicated Focke and Anna (Dirks) Goldenstein had a stillborn child in June of 1906. The entry in the funeral register was pretty straightforward. A further search of the index entries in"Evangelical Lutheran Church of America, Records, 1875-1940" located a baptismal entry in November of 1906 for Focke and Anna (Dirks) Goldenstein at Immanual Lutheran Church in Carthage, Illinois (actually the church in rural Harmony Township).

How can they have a child in June and in November of 1906? Any attempts to create soap opera scenarios are best avoided until after the actual record has been viewed.

A look at the actual record explains away the apparent conflict in the birth chronology.

Pastor in 1906 made a mistake in the church record.

Looking at the image accompanying this post, it's clear what happened. Elisabeth Marie Goldenstein was born on 2 November 1906 in Bear Creek Township, the child of Tonjes and Amalie (Geissler) Goldenstein. Her parents were incorrectly entered in the baptismal register as Focke and Anna (Dirks) Goldenstein. Also in looking at the baptismal entries from 1906, it appears that in January of 1955 Dick Jurgens requested a copy of the record--and it was noted then that an error had been made. The printed comments were apparently made by pastor Klein who signed his name in parenthesis at the end of the annotation.

It really is important to read those actual records.

Part I in this two-part series.