Do You Make Certain the Digital Images are Complete? Christ Lutheran Church in Gothenburg at Ancestry.com

I easily found the 1882 christening for Tjode Anna Goldenstein in Gothenburg, Nebraska's Christ Lutheran Church by searching for her name in the index to "Evangelical Lutheran Church of America, Records, 1875-1940" at Ancestry.com. It was easy.

And that was strange. It was strange because four of Tjode's younger brothers were born in Dawson County, Nebraska. In fact, years ago I wrote the church directly and obtained a transcription of their baptismal entry. So I knew they were there.

Because the church was small it was decided to manually search the records. I started with the entries for 1882 which started on page 29 of the baptismal register. That's the place to start as Tjode was the oldest child in the family. Page 29 is Ancestry.com's image number 15 in the digital images from Christ Lutheran Church. 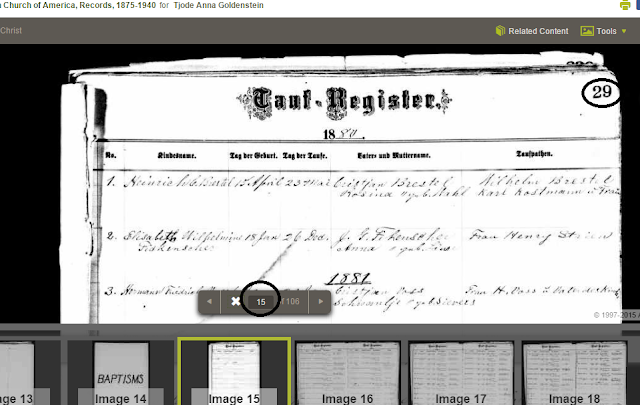 When I moved to image 16 I realized why I could not find the entries for the other children in the database. There were gaps in the baptismal entries. Image 16 contained page 36 of the baptismal register and contained entries beginning in April of 1887. Image 15--which contained page 29 of the register contained images through early December of 1882. 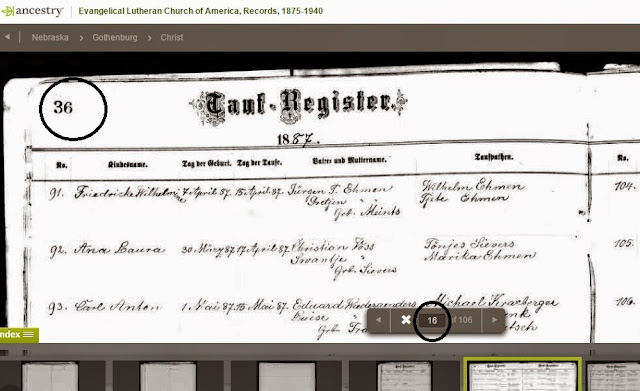 We'll see if we can get to the bottom of this missing baptismal record mystery.

The general lesson here is to search manually when necessary and check for the completeness of the records. One cannot find what is not there.

Stay tuned. We'll post an update when we've got one.
Posted by Bubba at 11:06 AM