I've written about my relatives enough that blogging as "cousin bait" is something I don't do intentionally. 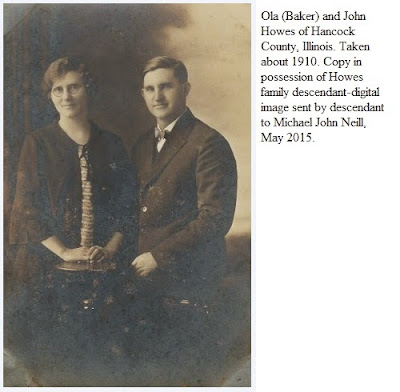 However, those who have never written a blog post in hopes of catching a cousin or making a connection might want to consider doing it.

A recent post to Genealogy Tip of the Day mentioned a card my parents received from an Ola Howes when they married. I didn't give much thought to the tip after I wrote it--after all there's always another day looming for which a tip needs to be written and I only wrote the tip because I needed a tip and for some reason the memory of the card popped into my head.

A day later a reader graciously sent me a digital image of a picture of Ola and her husband. The reader is a relative of Ola's husband, John Howes.

Regular readers know that I only write about my children's ancestors. That's enough to keep my occupied for the duration of my time on this planet and generally allows me to write about a wide variety of material (the curious can view an incomplete copy of my ancestor table here).

If you've not considered blogging, I'd suggest it. Don't consider it as a way to permanently preserve your genealogy, but rather as a way to share and connect with others who may be researching the same families--or the same general geographic area. I've gotten good information and leads from researchers with whom I shared a geographic connection and not a biological one. And as a last warning, not every one who reads your blog or "uses" information you post will contact you and some may "use" your information without asking.

Thanks to the reader who sent me the photo--I don't post names publicly on this blog and I forgot to ask her if she  minded me posting her name, so I didn't. She and I had a further email discussion and we have other "relatives of mine who married relatives of hers," which often happens in rural areas.

Ola's grandmother was Barbara (Siefert) Bieger Fennan Haase Haase (about 1825 Germany-1903 Warsaw, Hancock County, Illinois). There was something of a falling out when her estate was settled, but that's a story for another day.