A Seventy Year Old Child Lives on the Hard Road 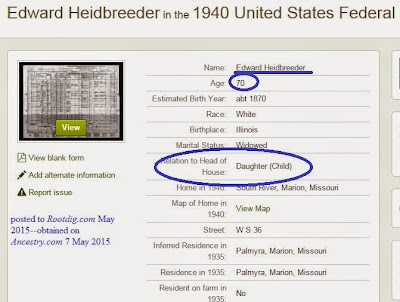 This post started out about an Ancestry.com transcription error and morphed into one about highway numbers. Genealogy is like that sometimes.

The transcriptionist for the 1940 census at Ancestry.com indicated that 70-year-old Edward Heidbreeder[sic] is listed as a son in the household.

That sounded a little off to me, but it was possible that he was living with a parent who was still living in their nineties.

Turns out he wasn't.

He is listed in the enumeration as a father-in-law of the head of household, Walter F. Bode.

The transcriptionist most likely grabbed the "daughter" relationship from the previous entry and assigned it to Edward. 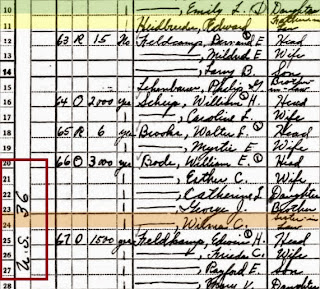 Reading the actual entry again answered the question. Their "street" was not "W S 36" it was "U S 36." And I'm reasonably certain locals didn't refer to it as a "street," but it's easy to see how transcribers would enter it in as the street on which the family lived. I'm also pretty certain they didn't have house numbers either.

The immediate lesson here is the one we've mentioned before:


look at the original