I'll start this off by admitting that the research here is incomplete. 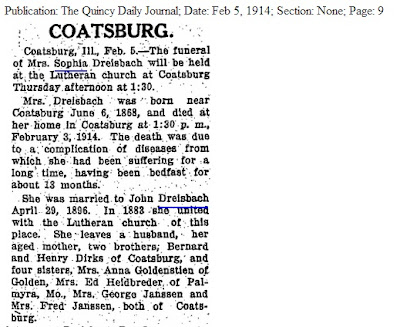 The Lutheran pastor at the Coatsburg, Illinois,  Lutheran Church was a little more specific about the relationship between the "Driesbacks." While he has Sophia's name slightly incorrect, he indicates that she "died childless and forsacken [sic] by husband."

The Quincy, Illinois, newspaper in March of 1914 indicated that W. P. Simons was appointed executor of Sophia's estate. I'm not precisely certain who he is at this point, but I believe he lived near the Dirks family in rural Coatsburg. 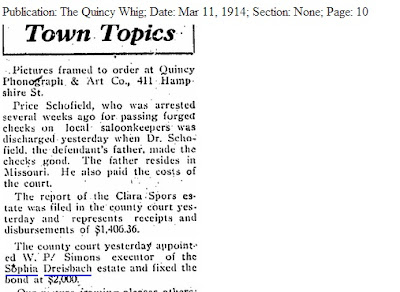 While this image is out of chronological order, it may explain why I am having difficulty finding the Driesbachs in the 1910 census--as of 1908 they were living in Texas when Sophia returns to Coatsburg to visit her parents and siblings. It only indicates that the Driesbachs had lived in Texas "for some time." 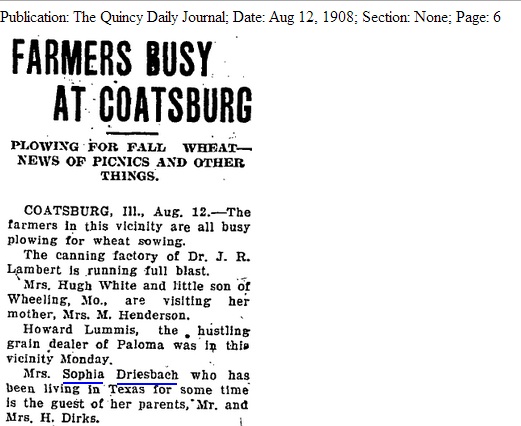 The Driesbachs were married in Adams County, Illinois, at the Lutheran Church in Coatsburg, in 1894. In 1900, they are living in Bear Creek Township, Hancock County, Illinois-the county directly to the north of Adams.

Why they were there is pretty clear, at least to me. A few households down on the census enumeration is the family of Frank and Anna Goldenstein. Anna was Sophia Driesbach's sister. 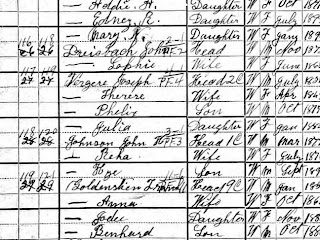 The Goldensteins were living on a farm they owned and had lived there since approximately 1889 when they returned to Illinois from Nebraska. The Driesbachs were living on a rented farm. Given that the Goldensteins were already there, it seems possible that Goldenstein might have become aware of the rented farm and was the "connection" that brought the Driesbachs to Bear Creek Township. How long they remained there is not known.

My next plan of attack is to obtain the estate records of Sophia Driesbach. Since there was an executor to her will, there might be some mention of her husband--at least a place to where a notice was sent. An additional fly in the ointment is that Sophia's father died in 1913 and if his estate was not settled upon her death she would have been his heir. An additional look at his estate records may be in order as well as there may be details about the Driesbachs mentioned in Sophia's father's probate as well.

Citation reminder: We are a strong believer in citing genealogical source material in the spirit of Evidence Explained. However, we choose not to include properly formatted citations in these blog posts. There's always enough information in the post to create a citation and full citations are included in my how-to newsletter Casefile Clues.