John Cheney Drives Cattle Across the Plains in 1852 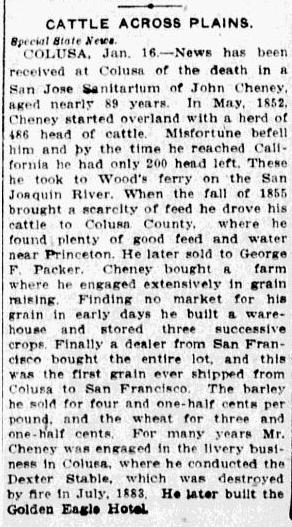 Cattle Across the Plains

You have to love obituaries that mention nothing about a man's family. This 1909 obituary for John Cheney has nothing to say about his wife or children. It does mention his 1852 cattle drive to California.

It does not say where John Cheney started out with 486 head of cattle, but when he finally reached California he only had 200 left. Apparently this means he settled in California in 1852 or before. There's plenty in his obituary from 1909 about his business endeavors, including the fact that at some point he sold all his cattle to George F. Packer and then engaged in grain farming and eventually built a warehouse and later built the Golden Eagle Hotel. Hopefully with all that activity I will be able to locate additional information about him.

This death notice comes from the San Jose Mercury News on 17 January 1909 and was obtained digitally on GenealogyBank.com.


We will have more updates on John Cheney as information is located. John is the first relative of mine that headed west during this time period, so I'm curious what details I can locate about his life. He left family behind in Illinois, Ohio, and Pennsylvania. John was a grandson of Thomas Chaney[sic] who died in Bedford County, Pennsylvania in 1856. Thomas is my 4th great-grandfather. I'm still searching the newspapers at on GenealogyBank.com for John as well as  Ancestry.com.


Hopefully we'll have enough information on John for an upcoming issue of Casefile Clues--stay tuned.
Posted by Bubba at 7:16 PM