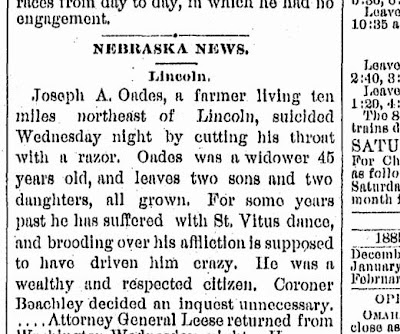 A search on GenealogyBank.com for Joseph Oades in Nebraska located one item of interest--a notice of his death from the Omaha World Herald of 12 Dec 1885. Joseph Oades was the third husband of Emmar Sargent (1839-1920). The couple divorced in Omaha in the 1870s after their marriage--they were not married very long and apparently had no children. The death is a sad one and the newspaper indicates that a search for coroner's records is probably futile. Of course there is always the chance that an inquest was later held. Based upon this notice, I should determine if there are other papers that might have provided additional information about Oades.

I should also manually view the list of Omaha newspapers on GenealogyBank.com to determine if there are papers before and after this date. Given the limitations of OCR searches, it is possible there are other references to his death that did not show up on my results list.

Several online references provide additional information on St. Vitus dance:
It is not known whether Oades had rheumatic fever as a child or later and it's possible he had another affliction that exhibited similar symptoms.

Research on Oades has been limited. He was only married to Emmar a short time and they had no children together and she appears to have left Nebraska after their divorce.

Other records indicate his middle name was Henry. It is very possible that somewhere in the compilation of this death notice the middle initial "H" was seen as the letter "A." One has to be careful drawing conclusions based only upon initials.