In Support of My Son Focke 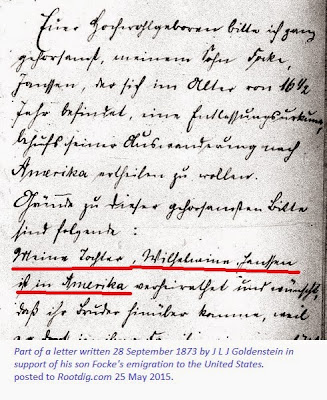 This is probably one of the greatest finds I have ever had at the Family History Library in Salt Lake City.

I mentioned Focke Goldenstein's emigration materials from Ostfriesland, Germany, in an earlier blog post ("Focke Gets Permission to Immigrate in 1873").

The records also included a letter from September 1873 where his father apparently is giving his consent for Focke to emigrate and also indicating that Focke's sister, Wilhelmina Janssen (yes that's her middle name), is already in the United States.

We're working on a translation of this two page letter.

It's not often I find a letter written by an ancestor. Well...it's a handwritten transcription, but still a letter.