Citations With My Phone

Citation is a crucial part of the genealogical research process.

But let's be honest it slows down the data acquisition process. Researchers get excited about locating information. They rarely get as excited about capturing the raw data from which to craft a citation.

Yet there needs to be a middle ground.

This week I've been at the Family History Library in Salt Lake and when I can I'm using digital media to capture genealogical information, including taking pictures of book pages with my phone.

Tracking the source is crucial. I've been taking images from a variety of ortssippenbucher from Ostfriesland, Germany. To track the book from which the picture was made, I wrote the name of the town on a small slip of paper and inserted that over part of the page I did not need. I used that piece of paper on every image from that book. 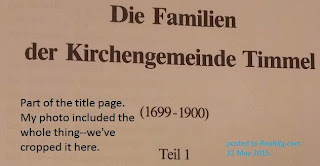 Then after the pages from the book of interest were taken, I took pictures of the title page of the book. I could have written a little more than the name of the village on the piece of paper, but that was enough to allow me to tag which book was used when taking a specific picture.

I also made certain (not shown in the image) that the page number was also clear in each picture.

My images sync from my phone to Google Drive and my laptop so I have them almost immediately.

And I also have enough information from which to craft a citation later.

Email ThisBlogThis!Share to TwitterShare to FacebookShare to Pinterest
Labels: citations