Finding the Desmarais Family in New York State in 1892 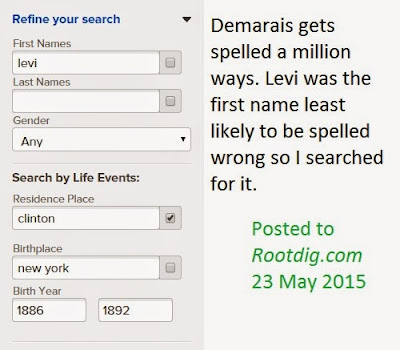 The recent update on FamilySearch of the 1892 New York state census reminded me that the name of one family for which I was looking is always hopelessly misspelled: Desmarais.

When I can, I've taken to searching without using that last name, focusing instead on other search paramaters.

In my case, I was pretty certain the family of interest was living in Clinton County, New York. And child Levi's name didn't have the issues with variants and diminutives that the names of the other children did. 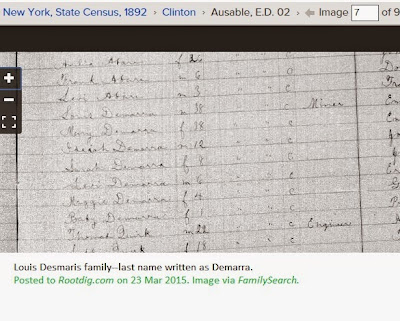 There were several results that matched my query, but only one had a last name reasonably close to Desmarais.

The family was enumerated as Demarra. Given how light the handwriting was, I'm fortunate that it was transcribed accurately.

All members of the Lous Demarra household were born in New York and all were citizens. Lous was a miner.

And there's no notation where on household begins and another one ends.

But the head of household is the one with an occupation, leading one to infer where one household ends and another one begins.