They Are In the Book But Not Named 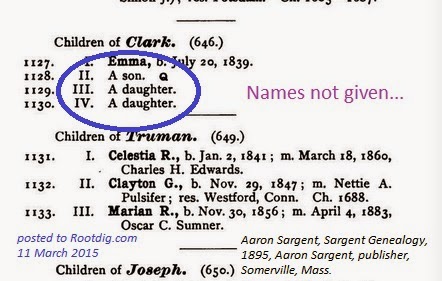 Back in the early days of my research, after attending a lecture or a seminar, I looked in a copy of the 1895 Sargent Genealogy for my elusive Ira Sargent. While published genealogies had their pitfalls, they were still a good source of clues if nothing else.

I didn't find my Ira Sargent listed. It wasn't of trying.

It turns out he is in the book.


No wonder I didn't find him.

I'm not certain why the last three children of Clark and Mary (Dingman) Sargent were not named in the 1895 publication. My speculation is that they simply lost touch with the rest of the family when Clark moved west, frst to Ontario and later into Illinois. All of Clark Sargent's children were born in Ontario, Canada, and he died in Winnebago County, Illinois, in the late 1840s. Clark did settle where he had no known Sargent relatives and, given that he was younger when he died and that his wife Mary died shortly after a subsequent marriage and that her second husband raised the children, it is very possible that they simply lost all touch with their paternal side of the family upon Clark's death. It is even possible that Clark wanted to lose touch with his family.

But it got me to wondering.

How often is the person of interest in a publication, only to be unnamed?

And how many families lost touch with their "families of origin" as they moved west?

The Sargents did settle in Winnebago County, Illinois, where it appears they had no immediate relatives. That's somewhat unusual but not unheard of. However, they are not as unusual as one might think. There were other Canadians who settled in Winnebago County--including several from Ontario.

The Sargents didn't move west with family. They moved west with neighbors.

Mary Sargent's second husband was an Ontario native she met in Winnebago County, Illinois. In 1850 she and her new husband and her children are enumerated in Winnebago County in the federal census. By the 1856 Iowa State Census, Mary is dead and her husband is heading a household with four of his step children of two children of his own. By 1860 they have moved to Missouri.

It's doubtful that the Sargent children had any contact with close relatives of their mother or father.

Which might explain why few stories of the family were passed down to the current generation and possibly why when the Sargent genealogy was compiled in the 1890s there probably was not any contact made with the children of Clark Sargent.