Evidence of a Canine But No Passport 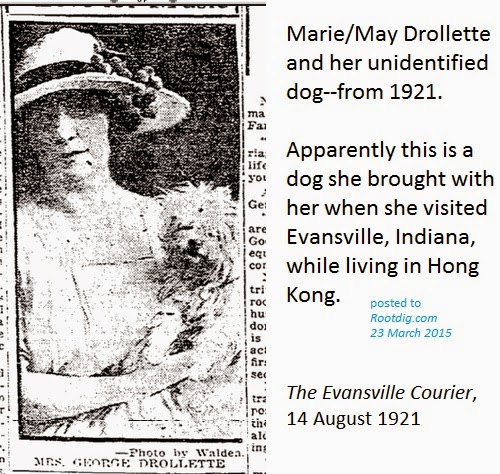 I've made no headway on locating  the five "passports" for the dog of Marie/May Drollete as mentioned in an earlier post. However, I did come across a picture of the dog in a 1921 article on Drollette in the Evansville Courier. It's not often I come across pictures of relatives and their pets in the newspaper.

That still doesn't answer the question of the "dog passport."

I'm inclined to think that Drollette was referring to some type of permit for the dog to board the ship and to accompany her on the voyage from Hong Kong to the United States.  After all, dogs probably don't need to document their citizenship status--only their health status. I'm also reasonably certain that the reporter who wrote the article didn't ask Mrs. Drollette for any "paper proof" of the five passports to which she referred. Like many newspaper articles, the information contained is only as accurate as the person providing it and is also dependent upon the amount of due diligence the paper exercised. I'm doubtful made an any attempt to back up Drollette's "dog passport" story.

And "dog passport" makes for an interesting headline.

One always has to be careful taking at face value what one reads in any newspaper. Just because the word "passport" was used does not mean that "passport" was what was meant.

It is also possible that this dog was not the one that accompanied Drollette to Indiana from China. It could easily have been a different one. The dog is never referenced by name or even breed.

Genealogy takeaways from the picture: