An 1811 Slave Murder in Virginia 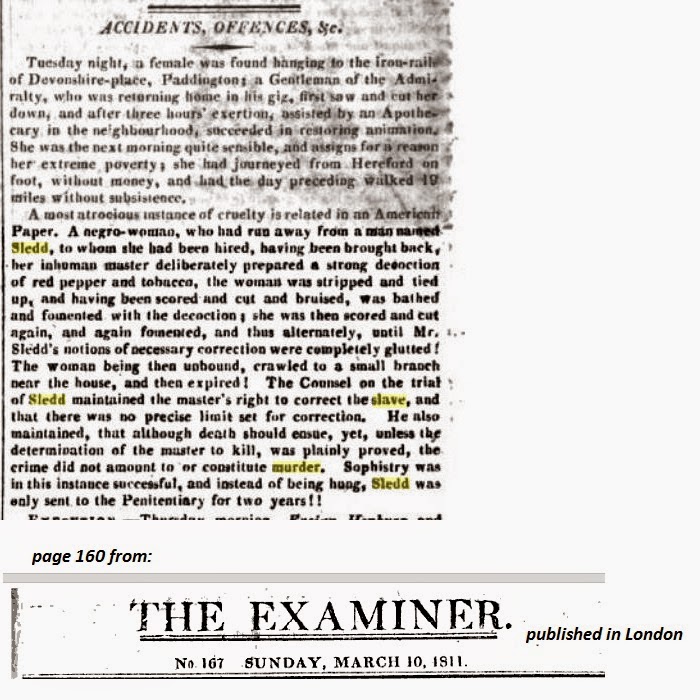 Sometimes the things we find in our past are not pleasant and often the unpleasant items are not ones that are passed down as stories from one generation to another. Such is the case of a Virginia slave who was murdered by a probable relative of my Sledd family.

Every so often, I try and determine who this "Sledd man" was that murdered a slave in Virginia in 1811. The Sledd name is not common and the individual referenced is from the same two county area (Bedford and Amherst) as where my Sledd family was from.

It was a vicious punishment of the slave by Sledd to which the article in the Examiner refers. The treatment of the slave (which was not even Sledd's slave but instead belonged to a neighbor) was brutal. Sledd received two years in the Virginia State Penitentiary for the crime.

Newspaper accounts indicate the case was heard in Bedford County, but offer no specifics as to Sledd's name.

It's probably time to access the local criminal records that would cover Bedford County--which I've mentioned doing before. 1810 census records, property tax and personal tax records may give me candidates for this Sledd man. I should also locate local newspapers as those references to the case may help to identify Sledd.

As mentioned in an earlier post, this may be a case that cannot be solved by online sources.

And unfortunately, the slave woman--poor soul--will never be identified.
Posted by Bubba at 11:02 PM