Most of us have photographs taken before we were born that we can identify the people in. Of course, some of that identification will be because we've only seen pictures of those people before.

I identified the people in this picture, even though two of them I never met.

The two boys in the front are Roger Neill (standing) and Pat Neill (being held). My father is in the background being held by his mother, Ida (Trautvetter) Neill. Fannie (Rampley) Neill is sitting on the porch and Charlie Neill is standing holding Pat. The three boys are grandsons of Charlie and Fannie--Ida is their daughter-in-law. 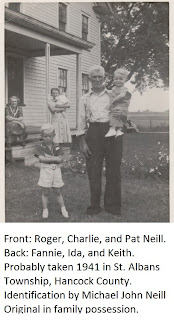 I could tell the boy standing was my uncle and after a little bit of looking I realized who was being held by Charlie. That's my grandmother standing in the back and there's only one other baby who would logically be in the photograph--my Dad. These three were the oldest grandchildren of my great-grandparents and figuring out who was who really was not all that difficult.

"Looks like a relative" is not adequate for identification.

It pays to proofread: As soon as I posted this image, I realized I left off the state in which the picture was taken. To me the state was obvious, but obviously that will not be obvious to others.