My Cousin Knows the Scoop

Apparently Focke J. Goldenstein did not know that his cousin was not supposed to provide testimony in his 1880 era homestead application. Apparently the government wanted an explanation. When you are applying for free government land, you usually find ways to comply with their requirements.

Focke's workaround was to make out an affidavit as to why William Ehmen provided testimony in his pension claim. 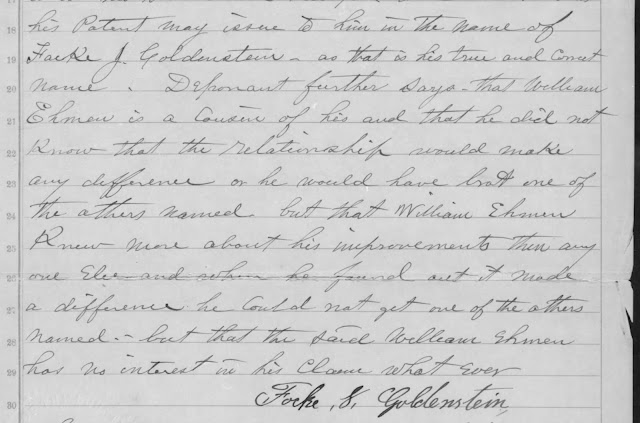 One never knows what tidbits may appear in a homestead appliation-especially to clear up any irregularities with the documentation. I already knew that Ehmen was Goldenstein's first cousin (their fathers were brothers), but if I had not this statement would have been even more helpful.

This homestead claim is for Focke J. Goldenstein who settled in Dawson County, Nebraska.  A more complete reference is provided in the image below.

The Nebraska Homestead Records are currently being made available on Fold3.com

. Please note that as of this writing, the digitization is  not complete and abandoned claims are not included.