An update of sorts on Montevill Harness. This man gets around.

Monteville Harness is living in Estancia, Torrance County, New Mexico, in 1910 (Enumeration District 274, page 12B). Farmer Monteville doesn't own the property he lived on in 1910 (the enumeration indicated the farm was rented), so I took a chance and looked for him in the online index to federal land records at the Bureau of Land Management website. My theory was that in 1910 the area was fairly unsettled and "free" land may have easily motivated a farmer to settle in the area.

For once I was right--there he was: 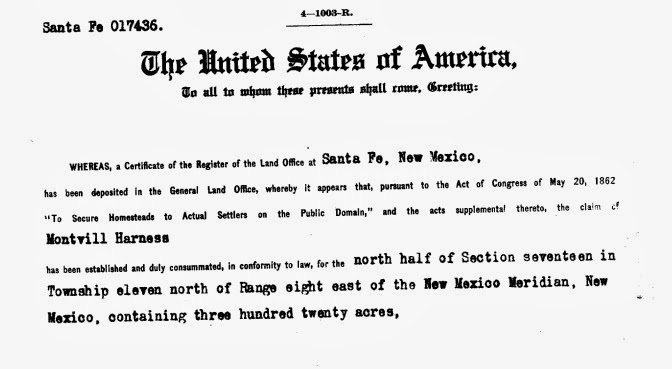 The farm he completed a homestead for was in Santa Fe County, but the name is so unusual that it almost has to be him. Of course, it is possible that there is another Monteville Harness living in Santa Fe County, New Mexico, but that seems unlikely.

I've got someone harnessing the homestead records for me and we'll have an update when the digital copies have been received. There may not be a vast quantity of genealogical information in the file, but one never knows.

A superficial search of post-1910 census records failed to locate Monteville in any census, but his wife apparently is enumerated in California in 1920. And there's a Monteville Harness living in Albequerque in the 1920s. I'm going to wait to do further research on him and his wife until I see what is in the homestead application.

Based upon what I've found on him and his wife in these later records, I'm wondering if the couple did not separate or divorce after 1910. At this point that is mere speculation based upon the information I have found thus far.

I'm also going to keep my goal in the forefront of my mind as well. I'm researching Monteville in hopes of determining who his biological parents are and if they were related to Monteville's adoptive parents in Hancock County, Illinois--James and Elizabeth (Chaney) Rampley.

Note: The Bureau of Land Management website does not (as of this writing) include every homestead ever granted--yet. Failure to find a name in that database does not mean the person did not receive a homestead.

------------------I'm a strong believer in citations and in my work (and in Casefile Clues) I cite material in the spirit of Evidence Explained. Here on the Rootdig blog, I have a different philosophy. Posts made here have enough information that the reader could locate where the material was obtained.
Posted by Bubba at 1:51 PM