A Troutfetter Coin and a Cross-Country Job Hunt

Ebay has a wide variety of family history materials, not just photographs, books, and postcards. This little "coin" is a perfect example.

I knew that George Troutfetter ran a general store in Colby, Kansas in the early 20th century. That was about the extent of what I knew him. Research on the Colby Troutfetters concentrated on George's brother Philip whose exploits in North and South America left a much more colorful record.

However, I have never stumbled upon any artifact of this type on Philip--despite his search for treasure in Columbia in the late 19th century. A search on Ebay did turn up this little item. This "coin" was worth 50 cents at the Boerner and Troutfetter store in Colby. 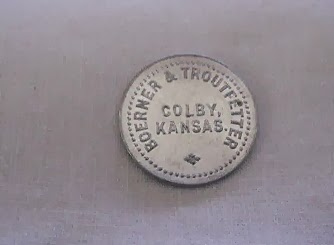 I just purchased this coin on  Ebay. I am waiting for it to arrive. I don't plan on spending it.

Apparently Boerner and Troutfetter were looking for a shoemaker in 1904 per this advertisement in a Minneapolis newspaper in 1904. Another little reminder that items about your ancestor can appear in just about any newspaper.

I'm not certain how many papers Boerner and Troutfetter advertised in for this shoemaker. Genealogy lesson: your ancestor may have easily have travelled across the country for a job during this era, especially if he had a marketable skill. Advertisements of this type are not uncommon during this time period.

Yeah...those names are spelled correctly. The Trautvetters use three different spelling of the name. But that is going to have to wait until another blog post.
Posted by Bubba at 7:39 PM