Hijacking a Truckload of Liquor in 1936 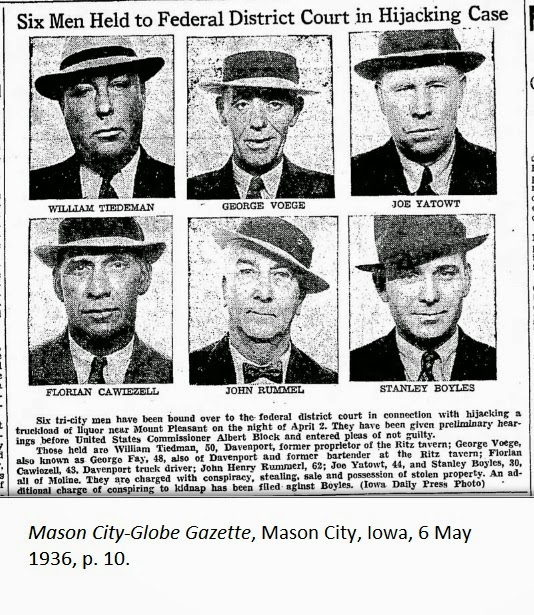 One never knows where or how pictures of relatives will be located.

While performing a little background work on the John Florian Cawiezell mentioned in an earlier post ("Iowa, World War Two Bonus Case Files," I stumbled upon the little gem shown above.  Six men were arrested from the "tri-city" area for hijacking a liquor truck near Mount Pleasant, Iowa, in 1936. The Mason City-Globe Gazette on 6 May 1936 pictured all six men.

The Florian Cawiezell shown above is not the John Florian Cawiezll from the earlier blog post. They are different men (born several years apart actually) although they share part of their name. A good reminder that even when the name seems to be unusual it might not be.

John Florian Cawiezell (from the earlier blog post) was the son of Jacob Cawiezell, also a Swiss immigrant to Scott County, Iowa. Jacob was not a son of the Anton Christian and Marie (Willi) Cawiezell.

No matter how unusual the name sounds, don't assume anything about the relationship. John Florian and Florian are related, but it is more distantly than first cousins.

And one never knows when one's relative will appear in the newspaper. These pictures are actually pretty good quality for a newspaper image.