A 1901 Pre-Marital Contract Detailed in the Newspaper 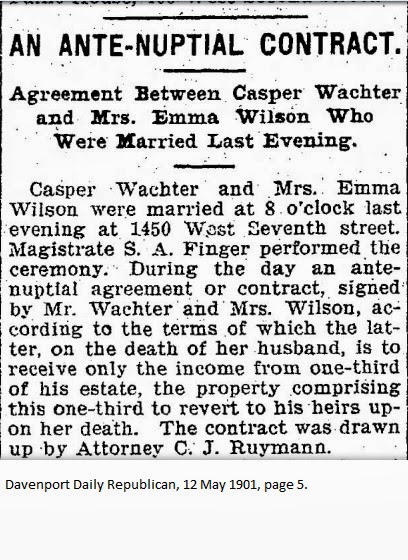 I never cease to be amazed by the things I encounter in a newspaper. This item from the Davenport Daily Republican of 12 May 1901 discussed an ante-nuptial contract signed by Casper Wachter and Mrs. Emma Wilson before their marriage on the same date. It is dificult to imagine such a contract being discussed in a newspaper today at the time of the marriage.

Widow Wachter had children by a previous marriage, many of whom were grown by the time their father married Mrs. Wilson. He also had step-children from his first marriage.

I'm not certain what the inheritance laws of Iowa were in 1901, but it would be reasonable to conclude that this provision was different from what was in state statute at that time. That's the only reason there would be a need for the agreement: to circumvent state statute.

It is possible that the contract was recorded in the records at the Scott County courthouse. It may be worth taking a look to see if there are any other details of the contract besides those mentioned in the newspaper.

If Emma died first, the contract didn't matter. If Casper died first or if there was a divorce, then it did. It could also be that C. J. Ruymann was trying to drum up a little business.

Note: Casper is my wife's step-3rd great-grandfather.
Posted by Bubba at 11:10 PM