Genealogical Marriage Drama Where There Was None

I should have read the marriage record a little more closely and it would have solved some problems.

This screen shot is from "Missouri Marriage Records, 1805-2002," at Ancestry.com.  I viewed the original image, but honestly only gave it a cursory read.

My "real problem" was finding Charles Butler in as many census records as I could in an attempt to learn more about his family of origin. With some help from fans of Genealogy Tip of the Day, a probable Charles Butler was located in Deerfield Township, Vernon County, Missouri. Deerfield Township is the township to the northwest of Drywood Township where the known Charles' father Benjamin Butler lived, so the distance is not great.

The age was consistent with the Charles for whom I was looking (he was born about 1861 or 1862), but the marital status was wrong and so was the place of birth which is stated as Kentucky. Working as a hired man, I really was not concerned about the place of birth as his employer might not have known where he was born. The marital status concerned me. It could have been a mistake, but it would have seemed that the Doolittles would have known if Charles Butler was married or not--especially if he married in Vernon County.

Unable to find Annie Butler, I decided to search for her by her maiden name on a whim.

And there she was: next door to Charles Butler's father (enumerated incorrectly as William Butler instead of Benjamin). 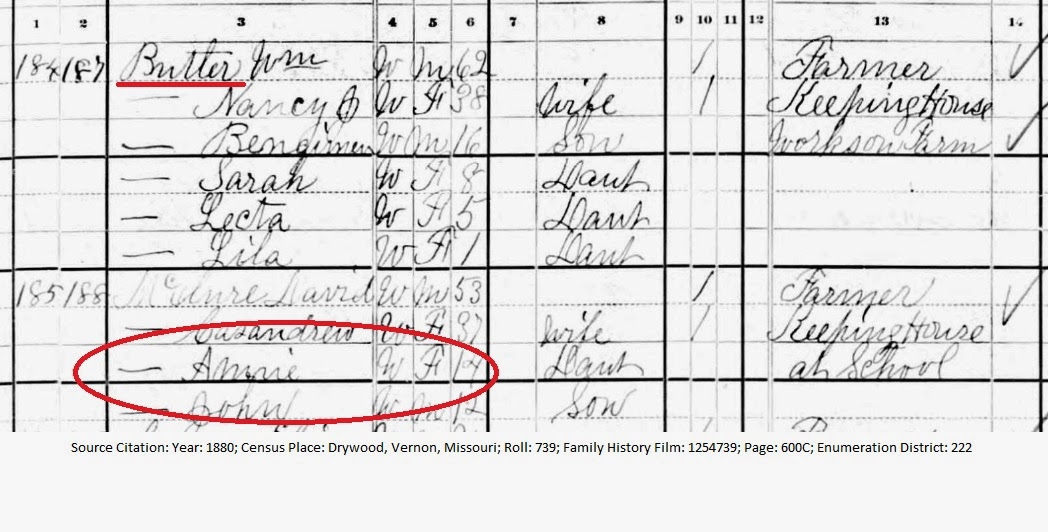 I had seen the names of the neighbors before but they never really stuck in my head to the point where I remembered them. Annie McClure is listed as a single 14-year old. The proximity of the families fit the "marriage within the neighborhood" theory perfectly.

The age and marital status had me somewhat concerned. According to the transcription in the Ancestry.com index the couple was married in March of 1880. The census was taken that summer. Couples did sometimes "go back home" until they could set up housekeeping, but it seemed odd that their marital statuses were both incorrect.

I went back and looked at the marriage record again in more detail.

The are several entries from 1881. The bottom one in this screen shot is the Butler one--it even indicates the couple were married in David McClure's home. There's no way the marriage was a "secret" from her parents.

The entry before the Butler one is an 1880 marriage, apparently recorded late.

The other marriages on the same page are 1881 marriages. The Butler marriage does not provide the year, but that's not unusual. In the context of the other records on this page, it seems reasonable that the marriage did take place in March of 1881--not 1880.


And that makes the census records make a lot more sense.

Sometimes there's not genealogical "drama." There's just something that we've failed to look at closely as we should have.
Posted by Bubba at 9:52 AM