I took a look at the maps on Randy Major's site in an attempt to better figure out the boundary changes between Bourbon and Nicholas Counties that are alluded to in a 1819 era deed of my ancestor, Augusta Newman. 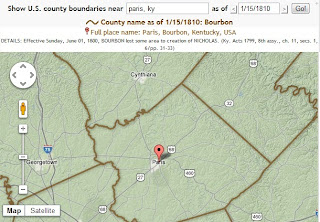 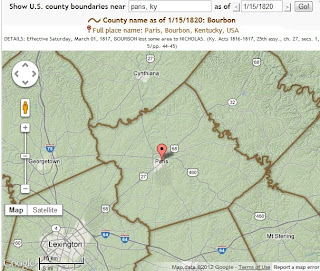 One can easily see that the border between Bourbon and Nicholas Counties was originally a straight line and that in 1817 the border was apparently changed to partially match a creek or stream in the area.

It is indicated that border changes are discussed in the Kentucky Acts of 1816-1817. I've found this item on WorldCat and am trying to obtain a copy on interlibary loan. Stay tuned.

We'll have a brief blog post when I get the Kentucky Acts of 1816-1817 and will follow up with a more detailed discussion in a future issue of Casefile Clues.
Posted by Bubba at 9:12 PM