During my recent group tour to the Family History Library in Salt Lake City, I had some time to work on one of my Kentucky lines--James Tinsley.

Since the last time I worked on James, the papers from the Bourbon County, Kentucky, court files have been microfilmed. Knowing that James lived in Bourbon County for a while in the early 1800s, I decided to search the records. I was rewarded with several references to his name in the defendants' index to these records.

One does not want to immediately "jump" to the desired case without reading the prefatory material to the microfilmed records. There was a discussion of how the records were organized for filming--indicating that the originals were highly unorganized and that the file numbers were not assigned by the court, but were done by those organizing the records for filming. The papers were not recorded in any exact order (except the assigned file number) and in some instances, cases that were thought to have been separate cases were later merged together before micofilming.

There were several court cases for James and I decided to make digital images of all of them. Doing so required some organization on my part. I decided to change my traditional file naming structure (which normally includes the FHL roll number and use a slightly different approach):

I used the county name, the file name, and who was the reason I saved the file. I also scanned the index pages as well and included those in my images. In the interest of time while at the library, I'll be honest, I did not include the film numbers. However, with the file numbers and the fact that all the cases were Bourbon County, Kentucky court cases, I will have no difficulty getting the film numbers when I get to organizing the materials after I get home. I prefer to leave myself a sufficient audit trail while researching--one that I can use when I get home and transcribe and organize the records.

What does this post have to do with whiskey?

James and a friend had neglected to pay a debt that they promised to pay not with cash, but rather with whiskey as evidenced in the note below. 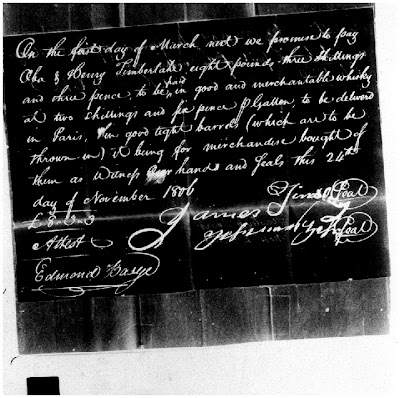 The value of the barrels were not to be considered as part of the payment of the debt. I guess we know what really had value in early 19th century Kentucky.

We'll discuss these court cases in an upcoming issue of Casefile Clues. Court cases are a frequently underutilized genealogical source--don't neglect them in your own research, even if your ancestor neglected to pay his debt in whiskey.