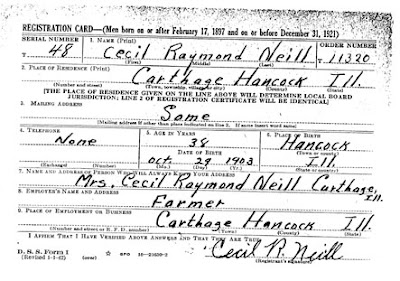 This was posted to my site years ago, but I'm creating a new post.

These are scans of the front and back of the World War II Selective Service Registration Card for my grandfather, Cecil Neill. This card is not a part of the "Old Men's Registration" that is available on Ancestry.com and FamilySearch. Grandpa was only 38 at the time and was not a part of that registration.

Information on obtaining these cards can be found on the Selective Service System website. The cards themselves for the World War II era are housed at the NARA facility in St. Louis. Cards for men born between 1877 and 1897 from the World War Two era are on FamilySearch (don't pay to access those--index is in progress here--all the cards are digitized here). The cards for men born after 1897 who registered for World War Two must be acquired through NARA in St. Louis, Missouri. Cards for men who are alive cannot be obtained except by the person himself. I obtained this card by proving (death certificate) that my grandfather was deceased.

The back of his card contains additional information: I never really thought about how tall Grandpa was as I never met him, but it's listed on the card.

We'll have a post later on the Registration Record, which I also received.

Of course he's not bald-unfortunately that trait didn't get passed down to me.